This Wednesday we will be joining The Albert Lepage Center for History in the Public Interest for the next event in their six-part series on “Revisionist History”: Revising the Cold War. Rebecca Oviedo, Distinctive Collections Coordinator, and Laura Bang, Distinctive Collections Librarian, will be there before the start of the event with some selections from Special Collections to whet your appetite and help get the conversation going. Our Distinctive Collections have plenty of primary sources to offer different perspectives, contemporary insight, and aid “revisionist history.”  Here is a sneak peak of just a few of the items we will be bringing: 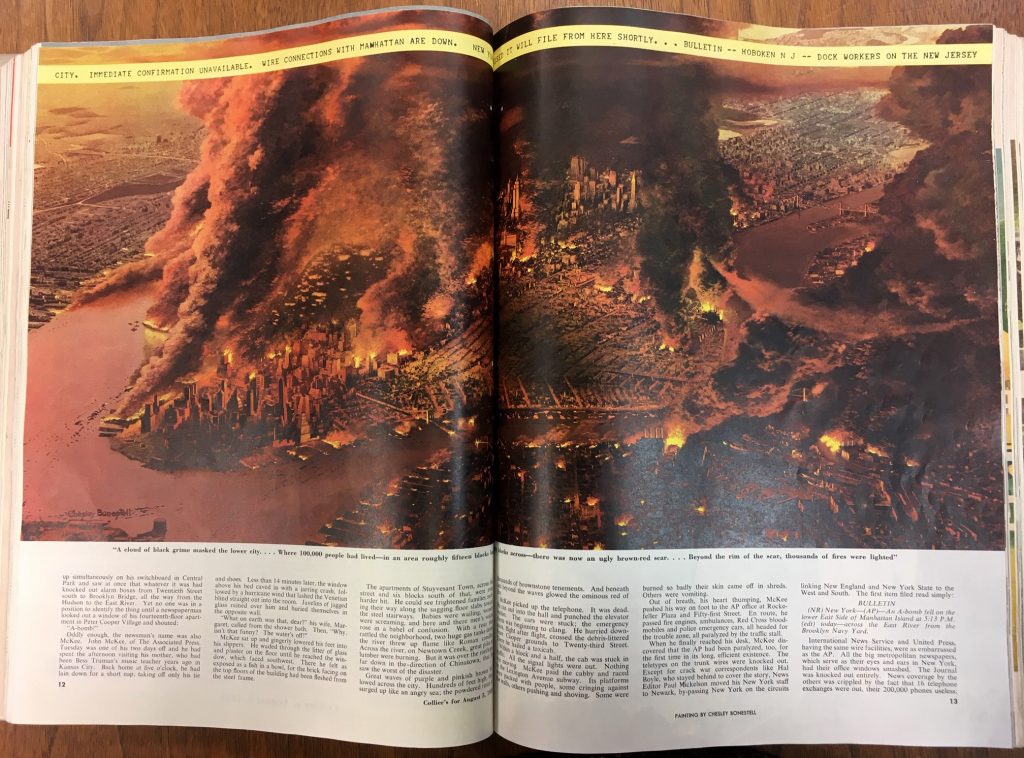 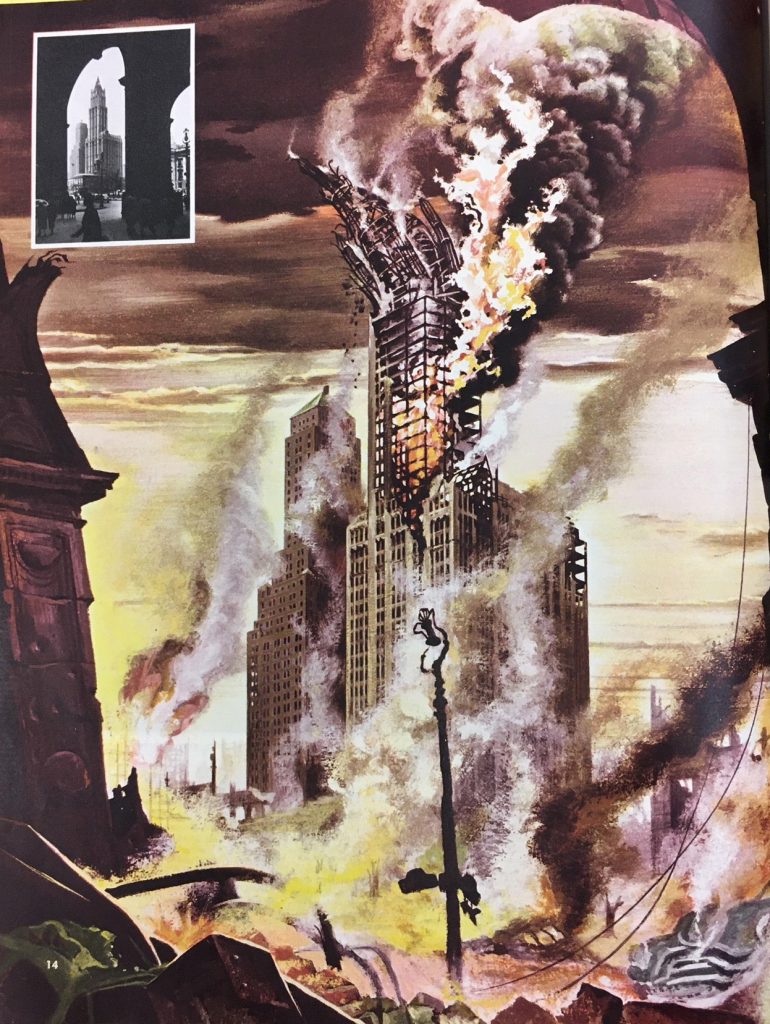 These striking illustrations from popular weekly magazine Collier’s, August 5, 1950 issue depict a burning New York City under nuclear attack. The imagined scenario ran in the article titled, “Hiroshima, U.S.A.: Can Anything be Done About It?,” written by John Lear. The first page of the article explains “the story of this story”:

For five years now the world has lived with the dreadful knowledge that atomic warfare is possible. Since last September, when the President announced publicly that the Russians too had produced an atomic explosion, this nation has lived face to face with the terrifying realization that an attack with atomic weapons could be made against us. But, until now, no responsible voice has evaluated the problem constructively, in words everybody can understand. This article performs that service. Collier’s gives it more than customary space in the conviction that, when the danger is delineated and the means to combat it effectively is made clear, democracy will have an infinitely stronger chance to survive.

The article appeared almost exactly 5 years after the U.S. bombing of Hiroshima on August 6, 1945. Though imaginary, the images and data are still arresting. Today, with advanced technology, computer simulation and interactive maps, users can view the frightening effects of nuclear detonation with panelist Alex Wellerstein’s NukeMap. 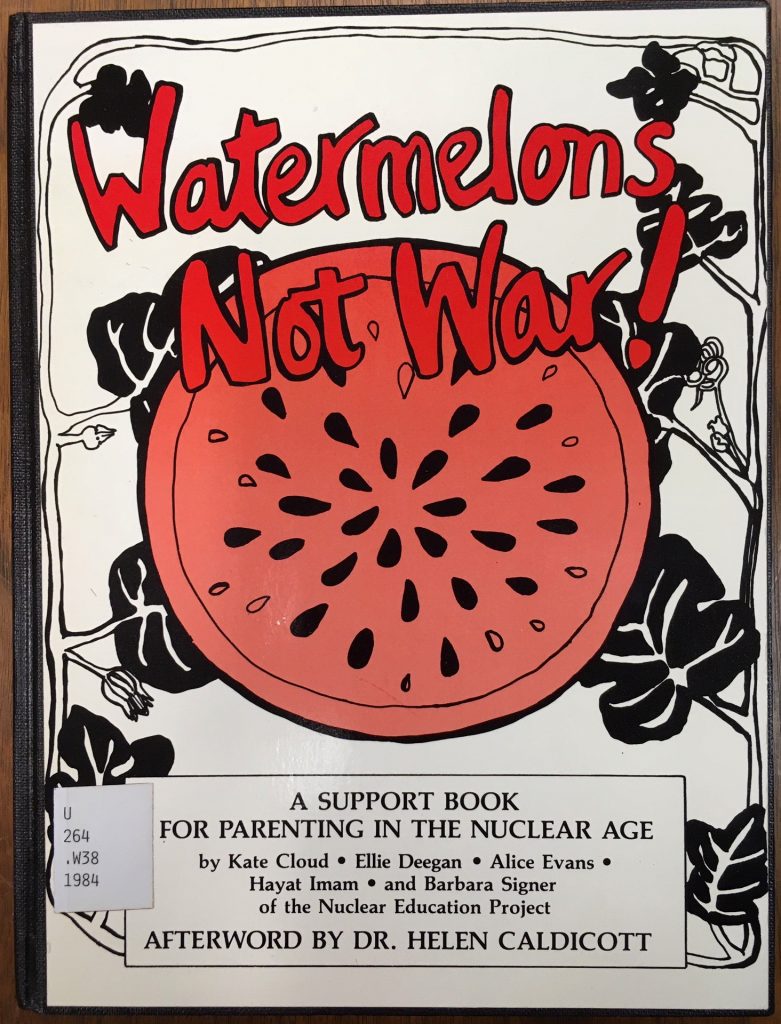 We’ll also have on hand this 1984 publication, “Watermelons Not War: A Support Book for Parenting in the Nuclear Age.” Published by the Nuclear Education Project (NEP), a group of five women who came together shortly after the accident at Three Mile Island in 1979. Concerned about parenting in a nuclear age, they developed this guide to help parents and others develop a sense of hope and “find ways to answer our children’s soul-shaking questions about the world.” 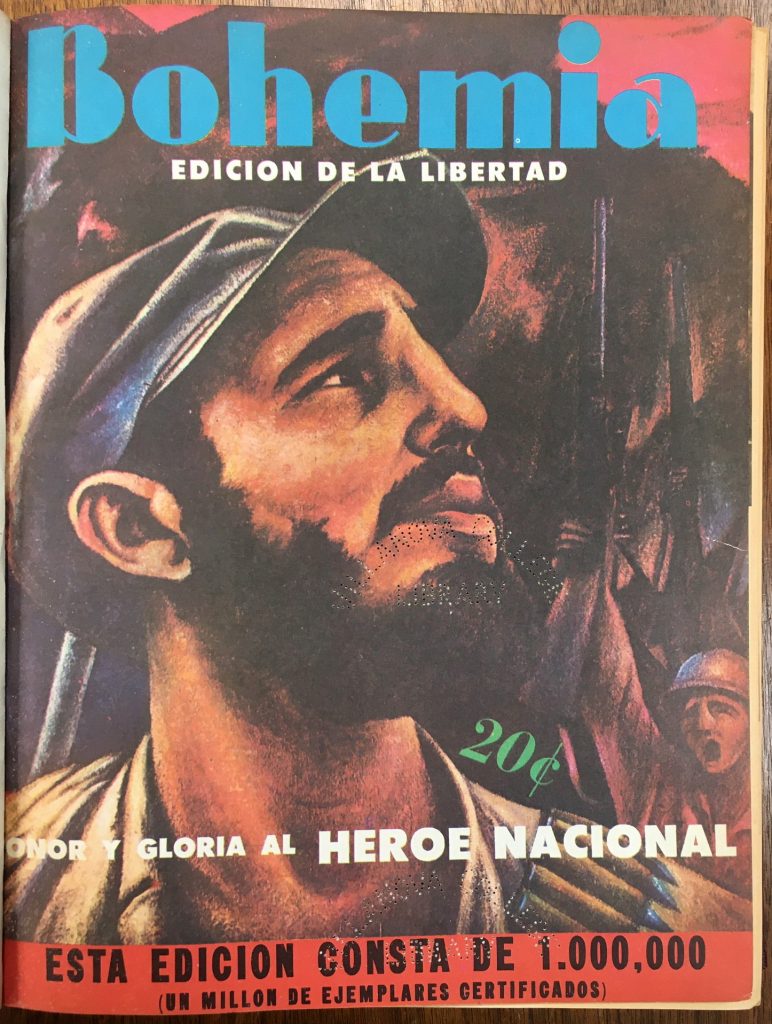 Our final sneak-peak is the January 1959 cover of Bohemia magazine, the first of a three-part special “Edicion de la Libertad” (Liberty Issue) published in Havana after the triumph of the Cuban Revolution. A portrait of Fidel Castro accompanies the headline “Honor and Glory to the National Hero” – the first time he was called a hero in any Cuban print media. The three issues together represent a turning point in Cuban history and for the publication as well – Bohemia, a popular weekly journal, was founded in 1908 and is still published today. One million copies of this landmark issue were printed to meet expected demand. With 210 pages, it is filled with graphic images of bloodied corpses and bodies of the dead at the hands of Batista’s regime. The stark images stand out between the advertisements for alcohol, tires, cigarettes, and face cream.[1]

“Revising the Cold War” will take place Wednesday evening, November 6, in Driscoll Auditorium. We’ll be there at 6 pm! The event starts at 7 pm. For panelists and more information: https://www1.villanova.edu/villanova/artsci/lepage/events/revisionist_history.html

[1]Special Collections holds three issues of Bohemia magazine published in Havana, Cuba in January 1959 upon the occasion of the victory of the revolution. Bound presentation volume of Jose Bustamente with title, date, and “Jose Bustamente” on front cover. All issues of Bohemia published between 1910 and 2013 have been digitized and are available on line through The Digital Library of the Caribbean. See also: Richard Denis, “UNA REVISTA AL SERVICIO DE LA NACIÓN: BOHEMIA AND THE EVOLUTION OF CUBAN JOURNALISM (1908-1960)” MA diss., University of Florida, 2016. Retrieved from https://ufdc.ufl.edu/UFE0050550/00001. And Yoani Sanchez, “Bohemia, Latin America’s Oldest Magazine, Destroyed by Censorship,” HuffPost, https://www.huffpost.com/entry/latin-americas-oldest-mag_b_831747. Accessed November 5, 2019.