Over ten years ago, Distinctive Collections posted a blog post, “THE ONE THAT GOT AWAY…,” about the many materials that are too difficult to digitize. Michael Foight, Director of Distinctive Collections and Digital Engagement, described how the unique Special Collections materials sometimes are too fragile or too tightly bound to be properly scanned. Another complication brought to light is how complex materials once digitized can lose its context with each other. For example, digitizing scrapbooks with many components are digitized individually may lose the interrelationships between each other and the scrapbook as a whole.  These obstacles highlight how the argument for “digitize everything” is not so simple or easy. But with the years of upgrades to the Villanova Digital Library we are able to revisit the scrapbooks that could not originally be digitized! 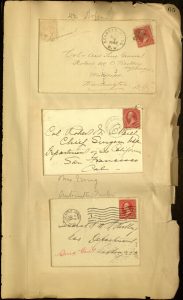 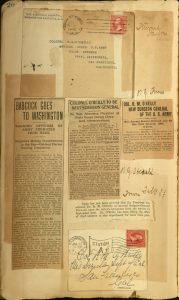 The Robert Maitland O’Reilly Congratulatory Letters Scrapbook, was mentioned as one such scrapbook that could not be digitized, with over a hundred letters in their original envelopes and many loose newspaper clippings. The scrapbook is a compilation of personal and professional congratulatory correspondence upon his appointment as Surgeon General. The letters and telegrams come from across the globe. As mentioned, the complexity and amount of loose material would be very difficult to scan and retain connection. Today, the digital library allows for pagination for the scrapbook and complex digital objects to be individually scanned yet retain connection as one entire entity in the digital library.

Though the digital library infrastructure did not solve all the problems of digitization. What remained a huge obstacle was the format itself. Over the years the binding of the scrapbook had deteriorated making the pages brittle, so each page had to be handled carefully to not exasperate the pages crumbling in scanning. Even the letters themselves were quite fragile.  Letters were made of different kinds of paper making some delicate or hard to remove from the envelopes. Each letter had to be opened carefully and set down with bone folder creasers so the letters could be open just enough without too much pressure to be scanned without ripping the paper. 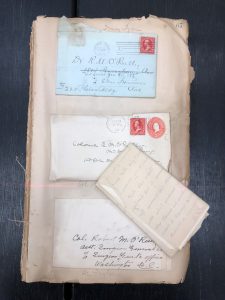 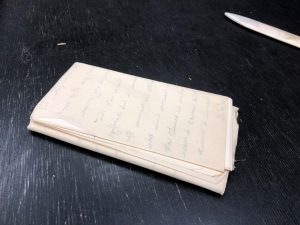 The entire process was done a couple hours each week and done over the span of eight months. Evoking Edgar Albert Guest’s poem,”It Couldn’t Be Done,” the scrapbook is done and can be viewed in the digital library.

So who is Robert Maitland O’Reilly?

Robert Maitland O’Reilly (January 14, 1845 – November 3, 1912) was the 20th Surgeon General of the United States Army, serving from September 7, 1902 to January 14, 1909. O’Reilly was born in Philadelphia and studied medicine at the University of Pennsylvania when the Civil War broke out. In August 1862, he was appointed as a medical cadet and served in several army hospitals, including Cuyler General Hospital in Philadelphia, a hospital in Chattanooga, Tennessee, and in the office of the medical director of the Army. After the war, O’Reilly return to University of Pennsylvania to finish his studies.  Upon graduation, O’Reilly continued working in the military and was chief surgeon for several units during the Spanish-American War. In addition, O’Reilly held appointments as a physician in the White House during both of President Grover Cleveland’s administrations.

In 1902, O’Reilly was appointed as Surgeon General of the United States Army and he and his administration made significant improvements to the army medical corps and medical research within the Army.

The scrapbook is also on display now in the exhibit, “Scraps for Keeps,” currently open to the public on the first floor of Falvey Library. His personal correspondence is also discoverable in our digital library and his other personal papers can be physically accessed through the American Catholic Historical Society: