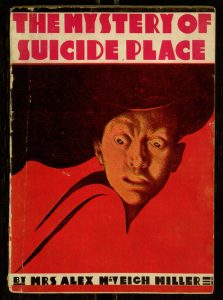 Like most of Mrs. Miller’s novels, the core of the story is a romance, in this case between a cheerful, independently-minded orphan named Floy and a wealthy young man named St. George Beresford. Also like most of Mrs. Miller’s novels, the romance is complicated by a number of factors, in this case including class differences, murderously jealous rivals, and Suicide Place, Floy’s childhood home, where a resident is driven to suicide once every decade. This last element, which provides a significant undertone of supernatural horror to the novel, makes this one of its author’s best works for reading during the Halloween season!

The entire book can be freely read online or downloaded in popular eBook formats through Project Gutenberg.