Earlier this year, we acquired an album of sketches by English artist Esther Borough Johnson. The album has been digitized so you can peruse it at your leisure. The album depicts various places in England, Italy, France, and other European countries. The Leaning Tower of Pisa is probably the most widely-recognized landmark in the album. 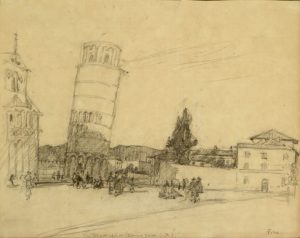 Some drawings are labeled with the name of the place depicted, but many are not. Many of the drawings are undated as well, but the dates noted in the album include 1921 and 1922. 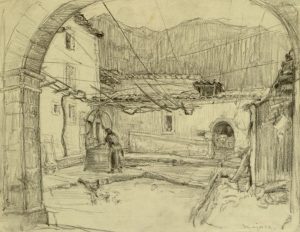 Sketch of a courtyard in Majorca (Mallorca). [5, recto]

The drawings are mainly done in graphite, although some have had color added. Many of the sketches are unfinished, likely quick drawings in situ that may have been used later as references for completed works. In addition to cityscapes, Esther drew a number of street scenes and portraits. 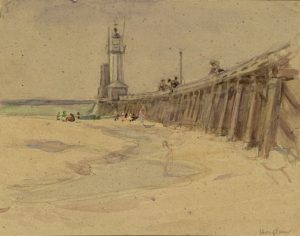 Esther’s art provides an intimate glimpse into several European locations in the early 1920s with an eye for more than just the typical tourist scenes. The art has been assembled into a larger album, but many of the works are done on smaller pieces of paper. It is easy to imagine Esther pulling out a small sketchbook whenever a particular scene caught her eye. 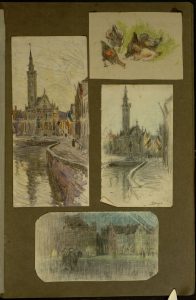 Two sketches of Bruges (Belgium), another unidentified city street, and some chickens. [41, recto]

The complete album of Esther’s sketches can be viewed in our Digital Library. Elsewhere online, you can view three examples of Esther’s finished paintings at ArtUK. ArtUK also has a portrait of Esther painted by her husband Ernest Borough Johnson. The Suffolk Artists website has a brief biography of Esther.
Like
0
No comments yet