eBook available: The Red Cross Girls in the British Trenches 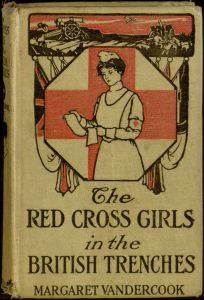 The latest title from our collection to become a Project Gutenberg eBook is The Red Cross Girls in the British Trenches, the first title in a series of juvenile adventures about four American girls who come from substantially different backgrounds but work together to provide relief to the wounded during the first World War.

While many war series were published at this time with a male audience in mind, this is one of the rarer titles marketed to young girls. The narrative is significantly more character-driven than the “boys’ books” of the time, but it still delivers a few action set pieces. It also touches on issues including gender roles, mental illness and the impact of the Civil War, providing an example of how these topics were portrayed to a mainstream juvenile audience at the start of the twentieth century (which, of course, may seem insensitive by twenty-first century standards).

The full text of the book may be read online or downloaded in a variety of popular formats through Project Gutenberg.