Recently added to the Digital Library is a unique item from the James D. Reap, Jr. World War II Collection. The item is a 16 ½ foot panorama sketch of Yokosuka Naval Base in Japan, drawn by Reap over the course of two weeks in 1945, while stationed on the USS Proteus in Tokyo Bay after the end of the war.

James Domenico Reap, Jr. was born on February 25, 1923. Originally from Berwick, PA, he attended Valley Forge Military Academy in Wayne, and the V-12 Navy College Training Program at Villanova University. Reap enlisted in the Navy in November 1943. He was assigned to the USS Proteus, a submarine tender, as a radar and communications technician. The Proteus arrived at Yokosuka Naval Base in August of 1945, where it was anchored near the USS Missouri for the formal signing of Japanese surrender on September 2, 1945.

In order to digitally capture such a large artifact, each section was scanned as a separate file and then manually stitched together in Adobe Photoshop. A few inches of extra overlap on the edges of each image helped to ensure a good match. Pairing the images together at the taped seams further aided in the creation of a cohesive image. Even if the item could be scanned as a single image, the resolution and quality would not be great enough. Scanning multiple images and stitching them together preserves the details and archival quality of the image.

Reap also sketched a view of Mt. Fuji, on August 29, 1945. This sketch is stored with the panoramic image in our Special Collections, but appears to be meant as a separate entity. 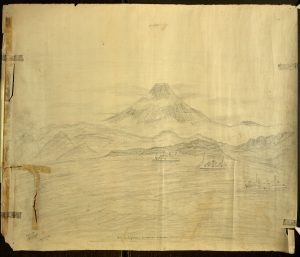