“The Man Who Saved The Betsy Ross House” 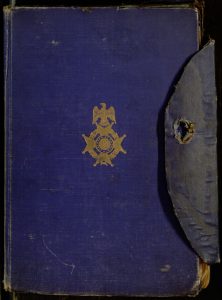 Imagine you’ve come across a box or a forgotten drawer stuffed with photographs, old programs, or tickets from a time you do not want to forget. Maybe you go out to the store and buy an album with blank pages, colorful papers and embellishments, and then get to work with some scissors and glue. Today scrapbooking is a thriving hobby and industry with millions of products sold to help you preserve your memories. Scrapbooking is not a new phenomenon however, and before these modern conveniences were available it would not have been uncommon practice to reuse or repurpose an old unwanted book.[i]

One unique example from Villanova’s Distinctive Collections has just recently been scanned and is now available in our Digital Library. In this case, the book was not entirely unwanted – the compiler did save a good portion of the book, but cut out the middle section, inserted yet another book, and pasted over other pages to create an entirely new book “for keeps.” A handwritten “Note” on the front flyleaf explains the author’s discovery of forgotten documents and prints in a cupboard when preparing for a move. 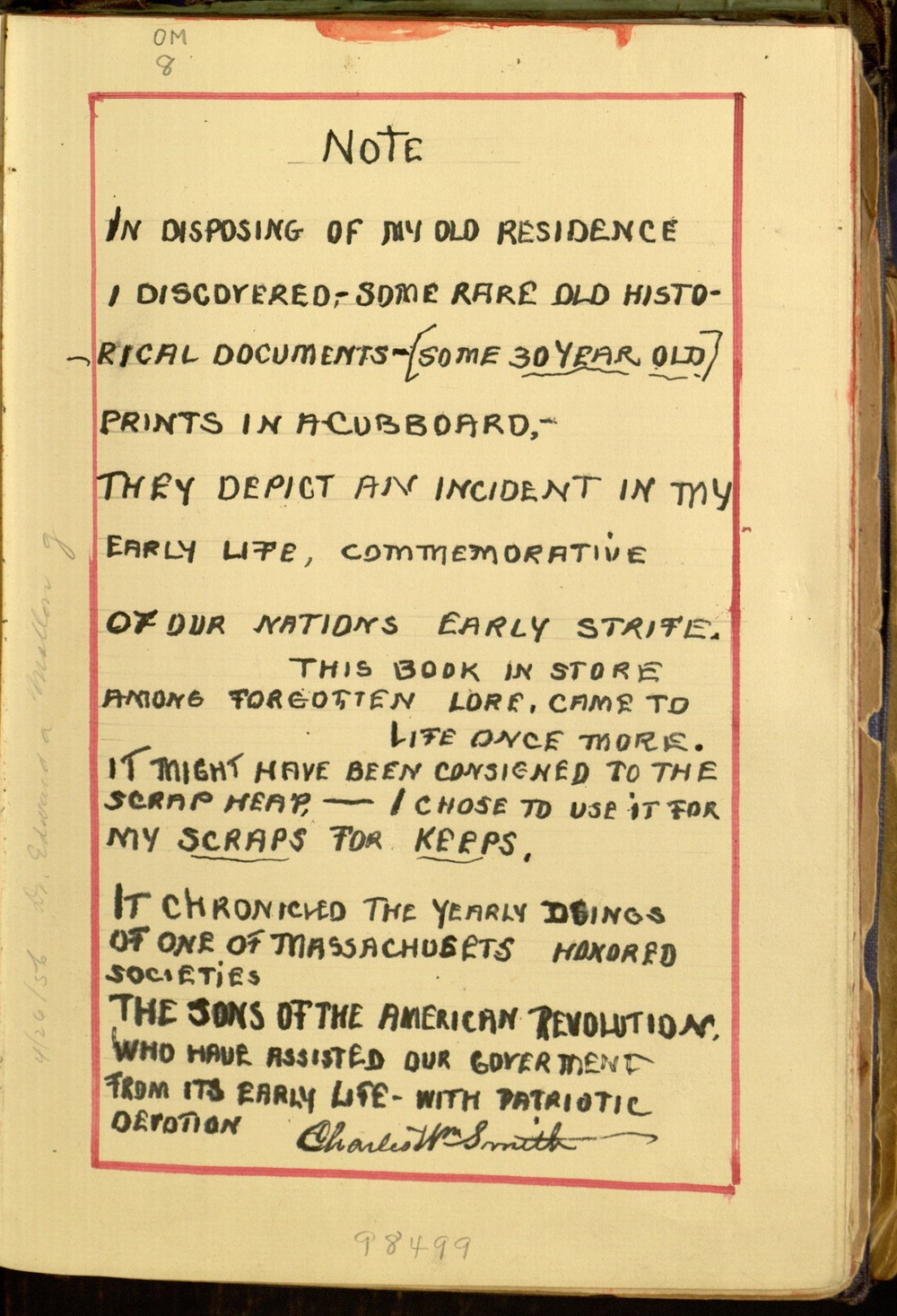 “This book in store among forgotten lore, came to life once more.

It might have been consigned to the scrap heap – I chose to use it for my scraps for keeps.” (Front flyleaf 2, recto).

The book, a 1910 edition of the Register of Members of “one of Massachusetts honored societies – The Sons of the American Revolution” was probably chosen for its handsome blue binding with gold gilt (which the scrapbook author extra-embellished with a handmade clasp attachment), but also for its patriotic association.

The author of this scrapbook is Charles William Smith (1843 – 1934). We know from the many newspaper clippings he compiled here, that he was born in New Haven, CT, came to Philadelphia as a coal merchant, and was a member of the Union League, the Sons of the American Revolution, the Masonic Lodge, many other patriotic societies, and evidently how he most wished to be remembered – “the man who saved the Betsy Ross House.” A clipping near the end of the book suggests Smith’s motive in this scrapbook’s creation. A poem written by Smith, published in The Frankford Gazette, April 11, 1924, begins:

I would not now mention my act

That happened then—not even to you,

I am prompted to do so however—I am told

There is some person this late day,

trying to rob me of my just dues[ii]

Indeed, the person most credited for saving the Betsy Ross House is Charles W. Weisgerber. You won’t find much about Charles William Smith.[iii] This is not for a lack of trying on his part. It seems that for several years on Smith’s birthday, or even Flag Day, the Philadelphia newspapers would reprint Smith’s story.[iv] In one case, Smith published a thank you to the Editor the next day.[v] As he tells it, Smith heard in 1892 that the house was to be torn down to build a factory. He then “awakened the interest of patriotic men and women,” raising money to eventually buy the house in 1905 by selling ten cent subscriptions to 1,040,270 persons. These certificates were sold through the American Flag House and Betsy Ross Memorial Association, of which both Smith and Weisgerber were founding members. But who had the initial idea to save the house? Did Betsy Ross even live at 239 Arch Street? Did she really sew the first flag? The legitimacy of Betsy’s story and the house has long been questioned. And this scrapbook is Charles William Smith’s personal attempt to stamp out any doubt of the answers to all three questions. 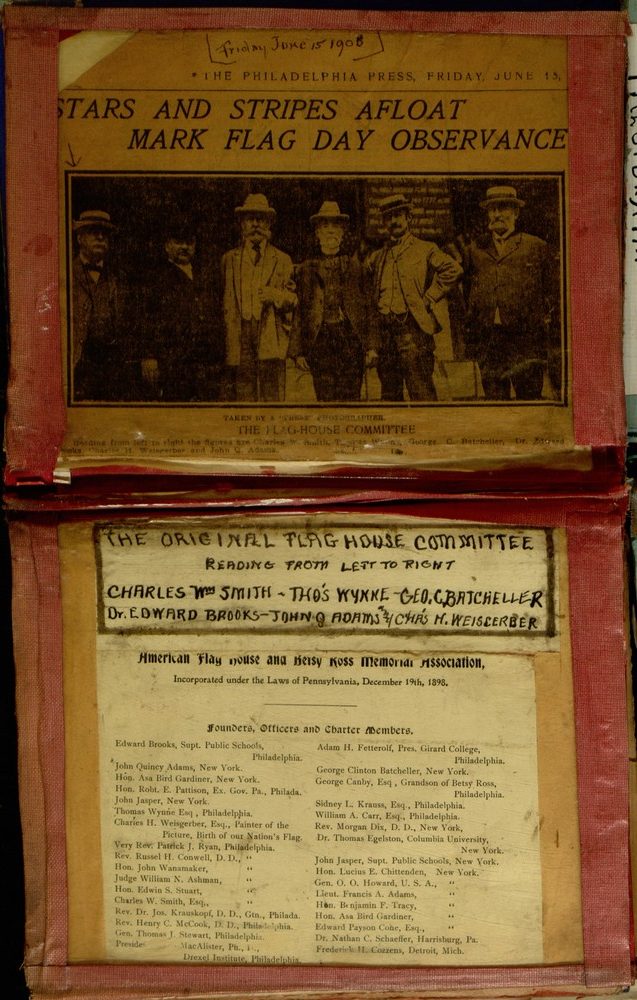 Smith has gathered various publications in the form of newspaper clippings, pamphlets, and books. They are joined with signed letters, sworn statements and endorsements by historians, Betsy’s descendants, President Warren G. Harding, and even notarized documents.[vi] Some of the items may seem disparate, but to Smith they may all share a patriotic meaning, and an intent to authenticate his claims.

The assemblage of the scrapbook begins with the SAR Register book, which remains intact up until the List of Members. This is where Smith’s scrapbook begins. After eleven pages, a second book is inserted, Betsy Ross and the United States Flag, A Paper Read Before the Bucks County Historical Society, 1909, by Oliver Randolph Parry. This portion of the scrapbook is scanned open as two-page spreads, with page numbers identifying the published book as “Parry, #”, and the scrapbook pages within as [Parry Scrapbook, #]. When the Parry book ends, the Scrapbook pages of the outer book resume, and then we have the remainder of the SAR Register book preserved. The final pages contain some inserts of personal documents: Smith’s membership to The Historical Society of Pennsylvania (January 24, 1898); his acceptance degree as a Master Mason of St. Alban Lodge #529 (May 6, 1886); and membership to the Athletic Club of the Schuylkill Navy (November 12, 1892). Within these pages are also bits of wood from Valley Forge National Historic Park and Independence Hall; with mention of a gavel made of wood from the floorboards of the Betsy Ross House. There is correspondence with O.H. Oldroyd, collector and historian of Abraham Lincoln memorabilia. And there is of course the use of red, white, and blue colors throughout, and the lyrics and music sheet for The Star-Spangled Banner. 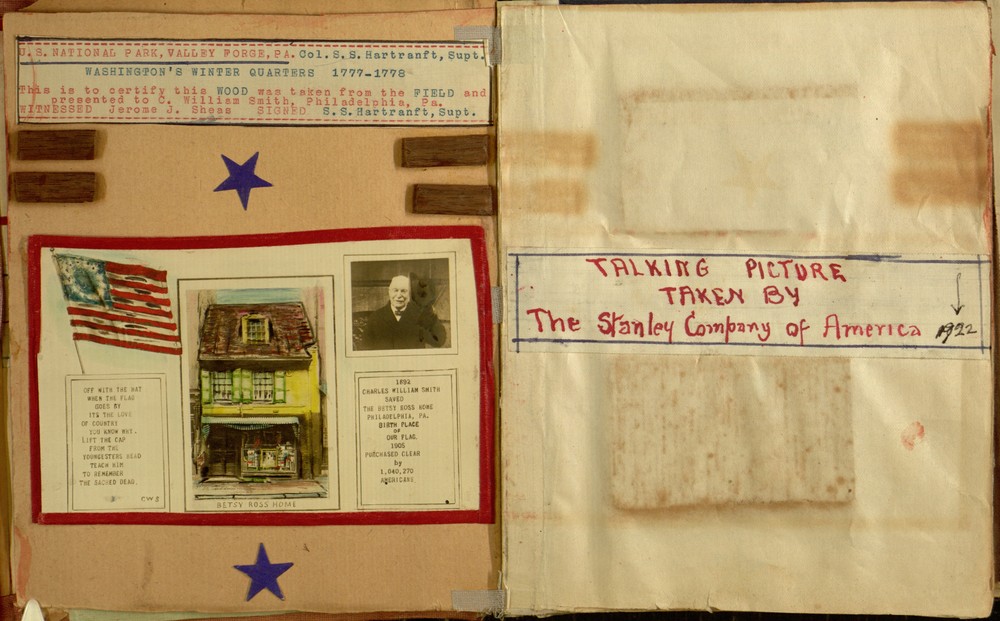 By making this scrapbook, Smith has attempted to give permanence to these items by pasting them down and preserving them for posterity. The scrapbook has been in Villanova’s collection since 1956, when it was donated by an alum, Dr. Edward A. Mallon. The connection between Smith and Mallon (if there is one) is unclear, and how it came to be in Mallon’s possession is a current mystery.

I have missed Smith’s February 7th birthday by more than a week with this blog post, but he probably wouldn’t mind seeing his name in print once more anyway: Today, Charles William Smith, “the man who saved the Betsy Ross House,” would have been 176 years old.

[i] “As one scrapbook maker whose family was busy cutting and pasting papers in 1873 explained, they were not ‘using up good printed books’… rather “there is nothing in them that we want, and so we propose putting in something, rather than have them stand idle…. Some of them are old school-books, not much worn, but out of date. Almost every library has some useless books.” See “Writing and recording with scrapbooks,” Ellen Gruber Garvey, OUPblog, https://blog.oup.com/2012/05/writing-recording-with-scrapbooks-history/.