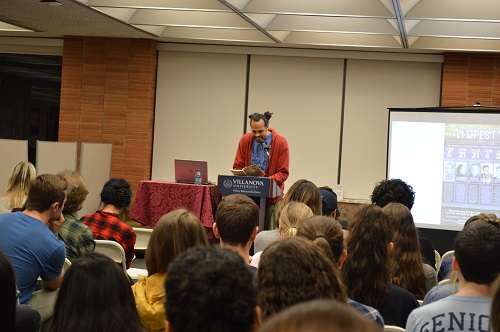 Ross Gay reads from his collection of essays, The Book of Delights

Mark your calendars for the 2019 Literary Festival lineup. All readings begin at 7:00 p.m., are free, and are followed by a reception and book signing.

Lauren Grodstein: Thursday, February 21st; Falvey Memorial Library’s Speakers’ Corner
Grodstein is the author of four novels, including the New York Times bestseller A Friend of the Family and the Washington Post Book of the Year The Explanation for Everything. Her latest novel, Our Short History was published by Algonquin Books in March, 2017. She directs the MFA Program at Rutgers University-Camden and lives in New Jersey with her husband, children and dog.

Mike McCormack: Thursday, March 21; Presidents’ Lounge, Connelly Center
McCormack has published two collections of stories, Getting it in the Head, which won the Rooney Prize for Irish fiction, and Forensic Songs. He is also the author of three novels, most recently, Solar Bones, which won the 2016 Goldsmith’s Prize and the 2018 International Dublin literary award. He is currently in residency at Villanova University as the 2019 Heimbold Chair of Irish Studies.

Claudia Rankine: Thursday, April, 4; Connelly Center Cinema
Rankine is founder of the Racial Imaginary Institute and the author of two plays, Provenance of Beauty andThe White Card, and five poetry collections including Don’t Let Me Be Lonely and Citizen, which received awards from the LA Times, the NAACP, the National Book Critic’s Circle and PENN. Recipient of a 2016 MacArthur Foundation “Genius” grant, she teaches at Yale University as the Frederick Iseman Professor of Poetry.

Julia Kasdorf: Thursday, April, 25; Dougherty Hall, East Lounge
Kasdorf is the author of four books of poetry, including Sleeping Preacher, which won the Agnes Lynch Starrett Prize, as well as the Great Lakes College Award and the Conference of Christianity and Literature Book of the Year. She is the recipient of a Pushcart Prize, and a grant from the National Endowment for the Arts. She is professor of English and Women’s, Gender, and Sexuality Studies at Penn State University.