March of the Sixty-Ninth

This recent acquisition titled, “March of the Sixty-Ninth,” references New York’s 69th Infantry Regiment, popularly known as “The Fighting 69th” or “The Fighting Irish.” The regiment’s coat of arms at the top of the page include the names of well-known Irish military heroes including Commodore John Barry, as well as motifs of Irish heritage such as the shamrock and the golden harp. The two Irish wolfhounds on either side inspired the regimental motto, “Gentle when stroked, fierce when provoked.”

The text, possibly a poem or a song, seeks to combat anti-immigrant sentiments by demonstrating the natural bravery of the Irish soldiers and their loyalty to both their home country and the United States. The idea is reinforced by the repeating exclamation by Winfield Scott, Commanding General of the U.S. Army, “Seldom such men I’ve led; There go the boys for a FIGHTING BRIGADE!”

Around 1851 the 69th Regiment began the tradition still followed today of leading the marchers in New York City’s annual St. Patrick’s Day Parade. But the text here likely refers to a military inspection parade observed by Scott, known for his nickname “Old Fuss and Feathers” because of his attention to details and military formalities. Traditionally, military parades were not commonly held in the United States outside of war time, though in the early days of U.S. history military parades were sometimes reviewed by the President on the Fourth of July. But given the publication date noted here as “All-Hallow Eve” – October 31st, 1858 – do you think the 69th were marching in a Halloween parade instead?! 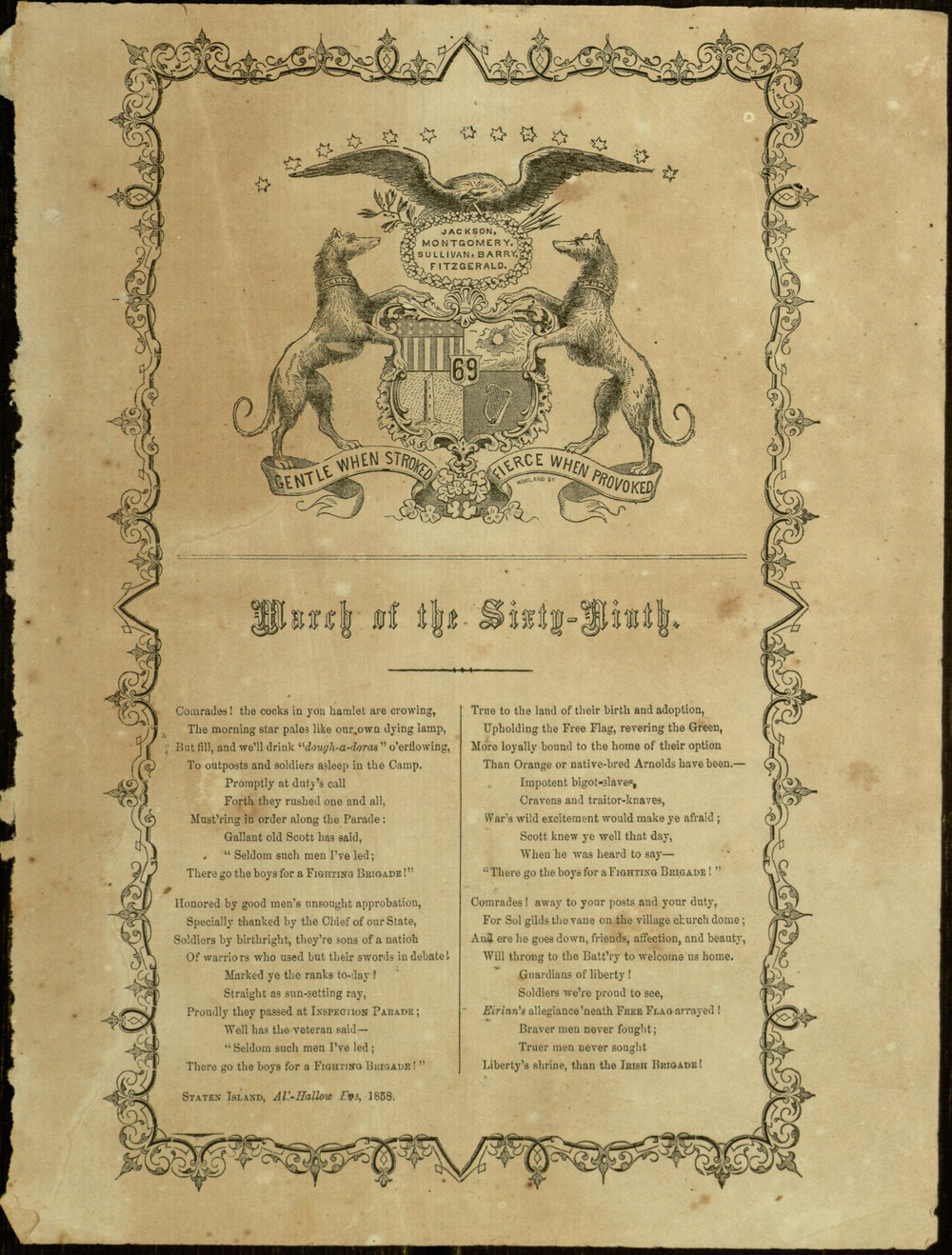 Comrades! the cocks in yon hamlet are crowing,
The morning star pales like our own dying lamp,
But fill, and we’ll drink “dough-a-doras” o’erflowing,
To outposts and soldiers asleep in the Camp.
Promptly at duty’s call
Forth they rushed one and all,
Must’ring in order along the Parade;
Gallant old Scott has said,
“Seldom such men I’ve led;
There go the boys for a FIGHTING BRIGADE!”

Honored by good men’s unsought approbation,
Specially thanked by the Chief of our State,
Soldiers by birthright, they’re sons of a nation
Of warriors who used but their swords in debate!
Marked ye the ranks to-day!
Straight as sun-setting ray,
Proudly they passed at INSPECTION PARADE;
Well has the veteran said –
“Seldom such men I’ve led;
There go the boys for a FIGHTING BRIGADE!”

True to the land of their birth and adoption,
Upholding the Free Flag, revering the Green,
More loyally bound to the home of their option
Than Orange or native-bred Arnolds have been. –
Impotent bigot-slaves,
Cravens and traitor-knaves,
War’s wild excitement would make ye afraid;
Scott knew ye well that day,
When he was heard to say –
“There go the boys for a FIGHTING BRIGADE!”

Comrades! away to your posts and your duty,
For Sol gilds the vane on the village church dome;
And ere he goes down, friends, affection, and beauty,
Will throng to the Batt’ry to welcome us home.
Guardians of liberty!
Soldiers we’re proud to see,
Eirinn’s allegiance ‘neath FREE FLAG arrayed!
Braver men never fought;
Truer men never sought
Liberty’s shrine, than the IRISH BRIGADE!