eBook available: The Dreadnought Boys on a Submarine 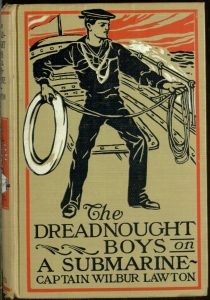 Our latest Project Gutenberg release, produced through the Distributed Proofreaders project, is another entry in the Dreadnought Boys series of naval adventures. In The Dreadnought Boys on a Submarine, series heroes Ned Strong and Herc Taylor are assigned to assist in government testing of a new experimental submarine. Of course, agents of a foreign power are on hand to complicate matters with a bit of sabotage!

This is a fairly typical series book for its time period, in which the good guys are very good, the bad guys are very bad, and the surprises aren’t overly surprising. The nearly-contemporary Motor Stories dime novels offered more interesting adventures along similar thematic lines. This book is interesting for at least a couple of small reasons, though. First of all, it sells a nationalist, pro-military stance to youthful readers just a few years before the outbreak of World War I; the extremely negative portrayal of a pacifist character is particularly noteworthy. Additionally, it paints a very positive image of journalists, perhaps because journalism was the primary profession of its author, John Henry Goldfrap, who wrote this series pseudonymously as “Captain Wilbur Lawton.”

If you care to take a first-hand look, the full text of the adventure can be read online or downloaded through Project Gutenberg.