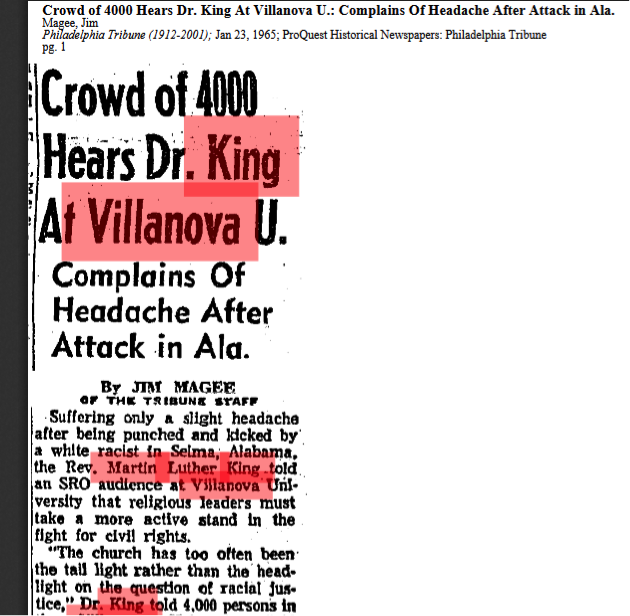 In recent years, the Black Lives Matter and Me Too movements have given minority groups a platform to voice their grievances and concerns, and most of the major U.S. news outlets have reported on these movements. However, minority voices and viewpoints used to be largely underrepresented in the media.

ProQuest has digitized the print archives of the most influential African American newspapers as much as they survived, and the Villanova community can now access them through the Library’s website.

The Black Historical Newspapers collection includes The Baltimore Afro-American, founded in 1892 by John H. Murphy, Sr. and one of the most widely circulated black newspapers on the Atlantic coast. It remains in print today under its new name Afro. Also included are the Chicago Defender, founded in 1905 by Robert S. Abbott, a newspaper that exposed Jim Crow laws in the South and urged African Americans to move north to improve their lot.

Today the Defender is the oldest newspaper in Chicago. Noteworthy for scholars with local history interests will be the Philadelphia Tribune, founded by Christopher J. Perry in 1884. It is the oldest continuously published African American newspaper in the country. Other newspapers in the collection are the Atlanta Daily World, the Cleveland Call & Post, the Los Angeles Sentinel, the New York Amsterdam News, the Norfolk Journal & Guide, and the Pittsburgh Courier.

African American communities continue to support these historically significant news outlets, many of which remain in print today. Interested readers will notice that in some cases print issues of the early years of these newspapers are lost and are hence not part of the digital archive. For those interested in learning more about the history of the African American press, the Library has the following recommendations: