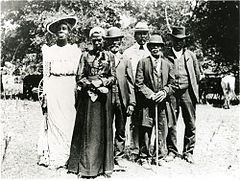 Today is Juneteenth, the 19th of June, and the day that marks the end of slavery in the United States. Although the Emancipation Proclamation was signed two and a half years earlier in 1863, at that time without mass media, it actually took the physical arrival of Major General Gordon Granger and his Union soldiers in Galveston, Texas, to announce to the last of the slaves held there that the Civil War had ended and that they were free. Hence, the birthing of a new Independence Day.

Juneteenth not only commemorates the abolition of slavery, but also is growing to be a multicultural and global celebration of  freedom in general. Specifically, it is an opportunity to build cultural awareness, and in many communities, to educate young African-American generations about the struggles of their past and how their ancestors prevailed. Gratitude and pride, story and song make up many Juneteenth celebrations.

Explore further the intriguing times after the Emancipation through the following Falvey resources about Juneteenth , curated by history librarian, Jutta Seibert. Contact Jutta for her guidance through your research needs and also for her help navigating the wealth of books and online library materials.

A report about the white resistance to emancipation in Texas from July 1865:

Secondary sources about the tradition of Juneteenth celebrations in the Falvey collection: