Kate Henderson, of Havertown, Pa., has been named a 2018 Falvey Scholar for her work on a project titled “Niche Modeling of Todus Birds in the Greater Antilles.” An Honors Biology major, Henderson also minors in biology.

She credits Dr. Peleg Kremer of Geography & the Environment as well as Dr. Robert Curry, biology, and graduate student Holly Garrod for helping her along the way with this project. You’ll find excerpts of her interview with Falvey Memorial Library below. 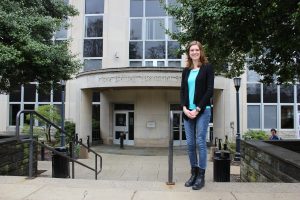 Henderson poses for a photo at Falvey’s entrance.

William Repetto: You’re from nearby. Has coming to Villanova always been your plan?

Kate Henderson: It had been on the radar for a while because it was nearby and actually both of my parents teach here, so I had known about the school but it was when I was starting to look at places that I really loved the environmental science program and I liked that it was a smaller school, that was close by; I loved it when I visited.

WR: And what about your major? Have you always wanted to study something science related?

KH: Yeah, I had known of environmental science for a while, but I think I was in second grade when I decided that I wanted to do conservation biology; we watched a video on saving the manatees and somehow that just clicked, like, “Yes!” that’s what I want to do. So I had pretty much always known some form of biology and environmental science, and then it was high school when I finally started taking some of those classes and I was like “oh good! That’s definitely what I want to do.”

WR: That must have involved a lot of lab work. What’s it like working in a lab?

KH: I do a lot of mapping and computer analysis so I have a lot of flexibility there in terms of when stuff fits into my schedule and it’s more like I’ll have the goals for the week of what I want to do, but I know for a lot of friends who work in labs that are a little more lab research based there that they would be in with more specific hours.

WR: What was the research question for this project in particular?

KH: I studied these five species of birds called Todus. They are a genus of birds that are all native to the Caribbean and they are really interesting because of the five species, three of them are species on an island by themselves, so there is one on Cuba, one in Jamaica, and one in Puerto Rico and then there are two species that are on hispaniola together. As a wider research interest question, it is really interesting to compare how does the ecology differ from the three species that are alone versus the two species that are together; but do you see competition between the two, do you see any differences in how they live and how they use their environments, so that’s sort of the larger area I was going into.

I was also interested because it is this really interesting question but there has not been a ton of studies on these birds, there’s still a knowledge gap that there really isn’t a lot of specific information about exactly where do they live on the islands and what are there populations like. So I was interested in trying to approach it from a perspective, kind of bringing in the geography of it and can I make detailed range maps predicting where the birds are found and what are the important environmental conditions for determining where they are found, kinda is the first step for future research projects. 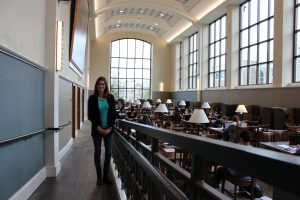 Henderson poses for a photo in the Dugan Polk Family Reading Room.

WR: Accounting for their movements without visiting the Caribbean must involve a lot of math.

KH: I haven’t had to do a lot, the model ArcGIS uses a ton of math, a lot of machine learning stuff, but luckily for me I don’t have to put as much math into it, the software does that part.

WR: What are your plans for this project moving forward?

KH: I’m really hoping to eventually be able to publish from this project. I would enjoy that. And right now, because I’m a senior, the current plan it—I’m actually working next year for the National Park Service, I have a six month position in Florida. And then, after a year of doing that, I’m going to graduate school. So, I know I’m interested in conservation and ecology, going that route in graduate school. And it’s funny because before this project I never quite considered this environmental modeling, niche modeling, as a specific path but I’ve found it’s something I really enjoy since doing this thesis.

WR: Did you use the library often in its composition?

KH: Yes, especially the library’s online databases, I use those a lot. Since it’s a topic not a lot has been published on there aren’t really books but I did have a heavy reliance on those databases. I think it was Robin Bowles who would come and talk to my marine biology class to talk about research skills in the library’s databases, so I took notes on that and I definitely utilized that a lot this year especially because the topic is hard to find information on so I was using a lot of keywords.