Patrick Monagle, of Landenberg, Pennsylvania, has been named a 2018 Falvey Scholar for his work on a project titled “Progressive Leadership and Economic Development in China.” When asked about the emotions accompanying his achievement, Monagle responded, “I’m just very thankful that I was selected. It’s a great honor.”

Monagle credited Professor Fred Young, VSB, and Professor David Ratigan, VSB, for directing him on the project. You’ll find excerpts from the rest of our interview below. 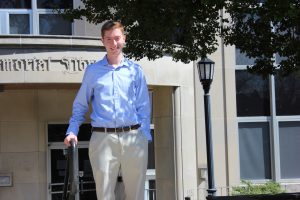 Monagle poses for a photo at the entrance of Falvey Memorial Library.

William Repetto: What inspired your focus on China for this project?

Patrick Monagle: I’ve been doing something on China every semester since second-semester freshman year. As an Economics and Political Science double major, I can work with China a lot – whether the US and China will go to war, why we won’t go to war, why there’s disparity in China. I forget the other ones, but I progressively built on it up until the research seminar for my Political Science class. I wanted to look at coast vs. non-coast region, and that was really what this project morphed into.

WR: You must know a lot about the different aspects of China then. How did you settle on this topic?

CM: I really fine-tuned it just this semester – last semester for the Senior Seminar for Economics, I just looked at four provinces, and that takes a while to download, that data. To give you an idea – four provinces I looked at, probably ten variables, and to do that, I downloaded Excel sheets that were only available when I was on-campus using the library’s resources, so that took a couple hours to put that into an Excel sheet. After that paper was done, I decided to take it a little further and expand it to all 31 areas, so all-in-all, the final data set I made was over 300 excel sheets, copy and pasted into one.

WR: Did you continue learning from this project? What was your favorite part?

CM: I definitely have a much greater respect for data; I don’t know if that’s my favorite part, but it’s definitely the thing I walked away with. I guess my favorite part is learning more about China as a whole; this is the deepest dive I’ve ever done in a project in gathering the data and running the data, but I’m walking away thinking to myself “getting solid data is really difficult,” and I have much better appreciation for the people that put together this data – 50 years’ worth of 25 variables in one Excel sheet. 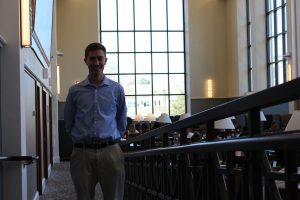 Monagle poses for a photo in the Dugan Polk Family Reading Room.

WR: What’s next for this project? Do you plan on publishing?

PM: I’m talking with my professors about refining it and maybe submitting it to one or two competitions; I’ve been working with it for so long that I know its faults better than anyone, so it’s a question of whether I can acknowledge there are faults and see if I can address that in a reasonable matter.

WR: And what’s next for you personally?

PM: I’ll be working at Morgan Stanley in New York in their Operations Division, so not sure what branch of Morgan Stanley I’ll be supporting directly. I interned with them last semester, and it was supporting their Wealth Management Division, but I could literally be doing anything at the firm in just a couple months. So while I have a much greater appreciation for research, we’ll see whether I go pivot and go into research, but we’ll see.