Simran Kripalani, of Edison, New Jersey, has been named a 2018 Falvey Scholar for her project “Death and Dying: The Literature, Philosophy, and Practices of Adult and Pediatric End-of-Life Care.” Her project revolves around the question: is it possible to die a good death? Ethics and religiosity lied at the center of this project and, in fact, inspire much of what Kripalani does outside the classroom as well.

“Religion’s all over, Eastern and Western religions tell us to be a good person, tell us to fight for each other, for equality, so most of my extracurriculars here are promoting that,” she said during an interview with Falvey. She also credited Professor Michael Tomko, humanities, and Dr. Angela DiBenedetto, biology, for inspiring and advising her throughout her project. She also graciously thanked her parents for their support. You’ll find excerpts from our conversation below. 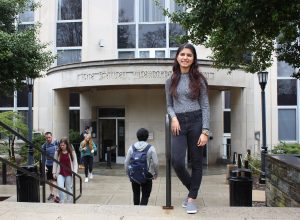 Simran Kripalani poses for a photo at Falvey’s entrance.

Simran Kripalani: Yes, so I’m a bio and humanities major. I came in as a bio major. I took my regular pre-med courses that I had to take, and then I went to the career fair, stumbled upon the humanities department, talked to them, and then took a class just for fun. It was actually called “God,” so how does God play a role in my life? Then I took three other gateways – it’s a four-gateway class; it’s “God, Person, Society, and the World.” What is your place in all of these things? So that actually helped me a lot with my career path and who I want to be as a person, cultivating who I am and also how that applies to being a good healthcare professional. So that helped me a lot.

WR: Has it always been your plan to attend med school and become a doctor?

SK: I actually wanted to be a veterinarian, but then I worked at an animal hospital for two years, and it was a little too depressing for me – there was a lot of euthanizing and everything happening – so I started to shadow physicians, and then I felt I wanted to do healthcare, but I didn’t know what. I always wanted to be in that path; I just didn’t really know what exactly I wanted to do.

WR: Let’s talk about your project. Can you give me an overview? And tell me what you argued?

SK: Because I’m a bio and humanities major, I kind of took a multi-disciplinary approach; I did a lot of research with scientific articles and research articles about the psychosocial side, whether it’s interviewing physicians, interviewing people, parents who had their children die, or people with terminal illnesses themselves. I did that path, and I also did fictional literature, and I also analyzed the Bhagavad Gita, which is the Hindu religious texts, St. Augustine – so the City of God – and St. Bellermine , which is another Catholic saint. I also looked at fictional literature, so Hannah Coulter, The Death of Ivan Ilyitch, which is a big one, so I wanted it so that I not only get the scientific and empirical facts, but that I also have stories.

And then my last part is how do I work with healthcare professionals to see how they handle the dying process, how do they cope with it and also what are the take-aways that you can get from the dying process? 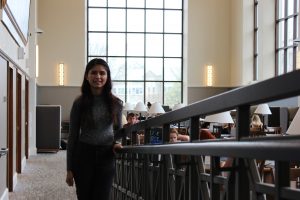 Kripalani poses for a photo in the Dugan Polk Family Reading Room.

WR: Did you find that the subjects of your interviews gave mostly the same answers? Or were they largely disparate?

SK: I found that most of the people I talked to and compared to the literature preserved the uniqueness of each family and also kept a very holistic approach to dying a good death, which is great because when you think of palliative care movements now and hospice care movements now, it’s a lot more integrated; it’s not just pain and symptom management. It’s “let’s take into account our religion, our spirituality, our relationship with our family, our relationship with our own bodies, our hobbies” so it’s a lot more multifaceted. I’m glad I kind of found that in both personal interviews and also in reading literature.

WR: Did you use the library often in the course of your work? What about during your Villanova career?

SK: Oh I’m here every day. This is my study spot; it’s also where I meet all my friends. I probably have thirty books checked out now. I’m always here… the 24 hour lounge or back near the old stacks, as long as I get a table.