Announcing Villanova’s One Book 2018-2019 Selection: Just Mercy: A Story of Justice and Redemption by Bryan Stevenson 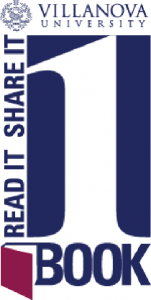 Villanova’s One Book Committee is excited to announce that Just Mercy: A Story of Justice and Redemption by Bryan Stevenson has been chosen as the campus One Book selection for the 2018-2019 academic year. Just Mercy, a New York Times best seller, is a true story about the potential for mercy to redeem us and a clarion call to fix our broken criminal justice system. The book highlights Stevenson’s account of his career as an advocate for marginalized people who have been either falsely convicted or harshly sentenced through a legal practice he founded, the Equal Justice Initiative (EJI). It also details his involvement in working with Walter McMillian, a black man wrongfully accused of murder and sentenced to death in Alabama in the late 1980’s. 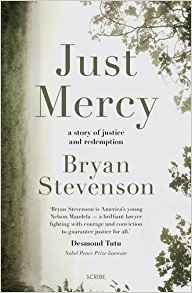 Stevenson is the founder and Executive Director of the Equal Justice Initiative in Montgomery, Alabama. Mr. Stevenson is a widely acclaimed public interest lawyer who has dedicated his career to helping the poor, the incarcerated and the condemned. Under his leadership, EJI has won major legal challenges eliminating excessive and unfair sentencing, exonerating innocent death row prisoners, confronting abuse of the incarcerated and the mentally ill and aiding children prosecuted as adults. Mr. Stevenson has successfully argued several cases in the United States Supreme Court and recently won an historic ruling that mandatory life-without-parole sentences for all children 17 or younger are unconstitutional. Mr. Stevenson and his staff have won reversals, relief or release for over 125 wrongly condemned prisoners on death row. Mr. Stevenson has initiated major new anti-poverty and anti-discrimination efforts that challenge the legacy of racial inequality in America, including major projects to educate communities about slavery, lynching and racial segregation. Mr. Stevenson is also a Professor of Law at the New York University School of Law. ( https://eji.org/bryan-stevenson ) 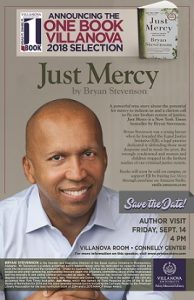 Villanova University will welcome Bryan Stevenson to campus on Friday, September 14th at 4:00 p.m. in the Villanova Room, Connelly Center, as a part of our annual One Book Villanova Lecture during the St. Thomas of Villanova Celebration. As part of the festivities, we will have a themed dinner prepared by Villanova’s Dining Services as well as a book signing. Books will soon be available for purchase on campus. Limited copies will also be available to borrow with a valid Wildcard at Falvey. Or, you could choose to support the Equal Justice Initiative (EJI) by purchasing a copy of Just Mercy via Amazon Smile: smile.amazon.com

Following the festivities on September 14th, the One Book Committee will continue to focus on the themes and topics presented by Stevenson in Just Mercy by working with campus departments and groups to sponsor topical events so the community can keep the conversation alive. The central focus of the events will be issues of justice and equality, especially for marginalized communities. Be sure to check Campus Currents and Wildcat Newswire for further updates. 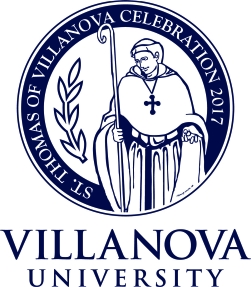 Just Mercy is the 14th One Book Villanova selection. One Book Villanova is a campus-wide effort spanning the academic year that presents to the university a book worthy of close reading, discussion, course adoption and the stimulation of dialog among all members of the campus community.

Please be a part of this important conversation!