Introduction: Ian Clausen & The Moral Self

Please join us today, Tuesday, April 17 at 3:00 pm in Falvey’s Speakers’ Corner for a Scholarship@ Villanova talk featuring Ian Clausen, PhD. In this book talk, Dr. Clausen will take us through key phases in Augustine’s development as a teacher and philosopher as presented in Reading Augustine: On Love, Confession, Surrender and the Moral Self (Bloomsbury 2017).

Describing an intellectual journey that will resonate especially with readers at the beginning of their own journey, Clausen will show that Augustine’s early writing career was an outworking of his own inner turmoil and discovery, and that both were to summit, triumphantly, on his monumental book Confessions. On Love, Confession, Surrender and the Moral Self offers a way of looking at Augustine’s early writing career as an on-going, developing process: a process whose chief result was to shape a conception of the moral self that has lasted and prospered to the present day.

As part of our ongoing coverage of the event, we’ve included information on Clausen’s own scholarly works, which are available through Falvey, to bring you a primer on his talk. 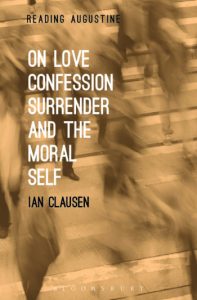 As a college student at Villanova, you might have pondered about the role of values or ethics in your liberal arts education. I know that I sure have. Clausen has written about this very question in the past in his Seeking the Place of Conscience in Higher Education: An Augustinian View. Centered around the question of how educators can inspire students to encounter their own conscience, this article asks one to think about – among other things – the definition of “conscience,” the third chapter of Genesis, and the role of education more generally.

We come to learn that the conscience can, or perhaps ought, to be viewed as a starting place for moral judgment rather than an ending place for negative emotions associated with our actions. We discover that God’s question “where are you?” might have a figurative meaning that drastically alters how we read the fall of man. And lastly, we learn that education might have more to do with bringing us in touch with awareness of truth rather than asking us to transmit the truth. Click the link above to read the article in its entirety; you won’t regret it!

Reading Augustine begins with the very same question from Genesis 3 – where are we? In this book, Clausen seeks to present the early writings of Augustine as relevant to the world we find ourselves in today as the archetypal conversion experience. Clausen also interrogates what Augustine scholars mean, and indeed what we mean, when we claim to talk about our “selfs.” 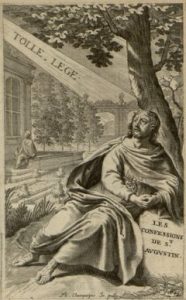 Conclusion: More on Clausen and Attending the Event

Dr. Ian Clausen is an Arthur J. Ennis Postdoctoral Fellow in the Augustine & Culture Seminar Program at Villanova University. He completed his PhD at the University of Edinburgh, Scotland, where he studied the writings of Augustine under the tutelage of Professor Oliver O’Donovan, and as a recipient of the international British Marshall scholarship. Before that, he received his BA in English and Religious Studies from the University of Illinois.

In his research, Dr. Clausen combines a focus on Augustine in his historical time and place, along with an interest in perennial questions around moral agency, formation, and the complexities of human love – all of which he will discuss at the event.

The talk, which is free and open to the public, is co-sponsored by Falvey Memorial Library and the Augustine & Culture Seminar Program. Please be sure to join us!