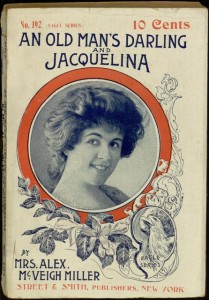 Our latest Project Gutenberg release, produced through the Distributed Proofreaders project, is another melodrama by the prolific 19th century author, Mrs. Alex. McVeigh Miller. In Jaquelina; or, The Outlaw’s Bride, a young orphan farm girl crosses paths with a gang of horse thieves, a wealthy poet and a jealous rival as she tries to gain an education and escape an unhappy life with an unkind aunt. First serialized in the New York Family Story Paper during 1882, this comes from fairly early in Mrs. Miller’s decades-long career as a story paper headliner; the edition in our collection is a later paper-covered reprint. While this is not the most sensational of Mrs. Miller’s writings (that title probably belongs with her over-the-top story paper debut, The Bride of the Tomb), it does contain some of the usual twists and turns that her readers have come to expect.

The full novel may be read online or downloaded through Project Gutenberg.