’Cat in the Stacks: Comics, “The Simpsons,” and “Mr. Burns, A Post-Electric Play” at VU Theatre

Did you know that part of what makes Falvey Memorial Library so unique is our love of popular literature? We have popular books of the present as well as dime novels of the past. We, of course, have criticism for your scholarly pursuits and, most relevantly for this week at VU Theatre, we love our comics!

We have the stereotypical academic stuff: an adaptation of “The Odyssey,” “The Canterbury Tales,” and even “Beowulf.” We also have the trendy works in comic circles these days – including “Habibi” and “Blankets” by Craig Thompson. We even have some of the comics that you’ll find adapted on television, including “The Walking Dead.”

As VU Theatre has begun showing “Mr. Burns: A Post-Electric Play,” I wanted to take the opportunity to introduce you to one of the most curious quotes articulated in our collection. In his “Adult Comics: An Introduction” Roger Sabin writes:

Although not derived from an adult comic per se, [“The Simpsons”] was touted as ‘the first ever adult cartoon’ and was created by a former alternative press cartoonist (Matt Groening). Though often extremely amusing, it was over-praised by critics, and not as innovative as its PR made out, amounting really to little more than The Flintstones with a dash of satire (not that there was anything wrong with that). 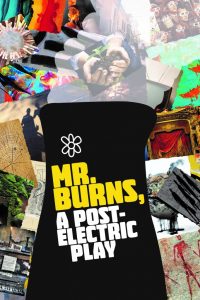 I find this quote curious because for appearing in a book that seeks to promote the serious study of comics and cartoons, this selection seems to diminish the cultural import of both “The Flintstones” and “The Simpsons.” Can it really be true that one of the most iconic families in recent American history – a family that spawned such staples of our irreverent television diet as “South Park,” “Family Guy,” and “Bob’s Burgers” – was over-praised by critics?

Let’s take a closer look at VU Theatre’s production of “Mr. Burns, a Post-Electric Play” and then return to this very question.

A Review: “Mr. Burns” Burns Down the House

“Mr. Burns” at VU Theatre greets its audience with a stage of absolute dadaist proportions, featuring elements befitting of an aristocratic sitting room, a Roman Catholic Church, and (I guess I’ll be the one to say it) a graduate student’s washroom. Scenic Designer Colin McIlvaine can also add to his résumé the erection of “an enormous recycled curtain comprised by over 700 plastic bottles.”

Act I opens with an important debate between four friends – what exactly did happen in the “Cape Feare” episode of “The Simpsons?” A stranger arrives to help fill in the gaps (Leo Bond), and within the conversation, we learn that our characters inhabit a a post-apocalyptic world brought about by the catastrophic failure of America’s nuclear power plants; were there 100s of them, or really only, like, maybe 20? 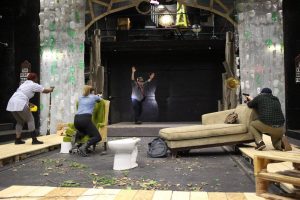 A stranger approaches the main characters.

Matt, one of the four friends, portrayed by Lee Stover, steals the comedy of this first act, wavering between clarity and confusion as he recounts “Cape Feare.” Brishen Miller, retaining the quiet suspiciousness of his character in “Intimate Apparel” as Sam in“Mr. Burns,” silently moderates the act’s debate from a pallet off to the side.

Sisi Wright and Tara Demmy, who play Maria and Jenny, respectively, demonstrate an amazing range in their acting skills as they seamlessly transition from comedic to solemn to frustrated then back to comedic – one of the many pleasures in their performances overall. 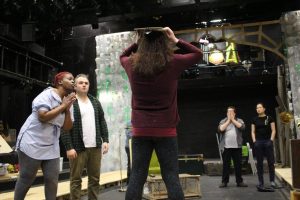 The cast/characters try to figure out their play within a play in Act II.

Act II opens with the reassertion of Mina Kawahara’s incredible stage presence, still prominent on the mind of “Godspell” audience members, as the friends have turned their debate into a stage show seven years later. This portion of the show starts to expose the deadly serious underbelly to “Mr. Burns’” elements of comedy, as the characters remind us that commercials contain “always that question of identity” and “things are funniest when they’re true.”

I forewarn you now that the third act will confuse, entertain, frustrate and satisfy you – sometimes all at once. The absurdist, surreal, and even Dada elements of the play come to a crescendo in this act that shows the retelling of “Cape Feare” some 75 years down the road. What you will find is subjective to each individual audience member, but I assure you that your discovery – like the rest of the play – will be genuine, hilarious, and even profoundly sad. 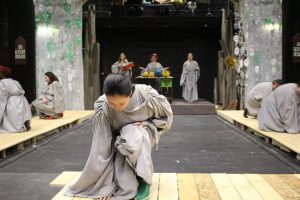 The bizarre beginning of the stellar final act. (Kawahara at front.)

One of many climactic moments in the final act includes an interlude when Bart (Kawahara) and Lisa (Shawneen Rowe) sing an adaptation of “The Flintstones” introduction to Mr. Burns (Miller) about messing with the Simpsons.

In this moment, “The Flintstones” tune mixed with “The Simpsons” characters reinforces the play’s central message that popular entertainment, those works of art that infiltrate our lives everyday in seemingly insignificant little ways, are the real works that will carry us through our darkest times.

Article by William Repetto, a graduate assistant in the Communication and Marketing Dept. at the Falvey Memorial Library. He is currently pursuing an MA in English at Villanova University. (Images courtesy of VU Theatre’s Marketing and Public Relations team.)