Okay, Nova Nation, so I know that we aren’t are all Eagles fans here; some of us might even be, gasp, Patriots fans. (At least all of us can get behind the SuperBowles giveaway though!) I’ll have you remember, however, that when it was the Nova Nation’s turn to win a national championship, the city of Philadelphia got behind us. It might, just might, be our opportunity to give some support back. 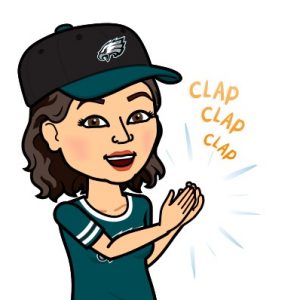 Hunter‘s from out of town, but she’s an Eagles fan this weekend!

After all, Villanova’s only a traffic-riddled drive up 76, and a labyrinthine exploration through West Philadelphia’s litter-strewn streets, then a few hundred stops at traffic lights up the Main Line from the Eagles’ home. And – if you’re lucky enough to find a parking spot – you can walk yourself to the heart of campus at Falvey Memorial library, and you’ll notice a peculiar thing:

We already have a portrait of Super Bowl LII hanging in the Dugan Polk Family Reading Room. Can you spot it? No, it’s not in the lobby (though you could grab a coffee and a cozy chair there). You won’t spot it above the high-backed armchairs when you first leave the lobby. Instead, our depiction of the big game resides right about you as you walk inside – “The Triumph of David.”

The screen we will all be glued to this weekend will be exactly that – a battle of David versus Goliath. The Patriots have won five Super Bowl Championships in the last 20 years; the Eagles have none – ever. It’s hard to imagine a started for the Pats other than Tom Brady. Nick Foles wasn’t even the Eagles starter most of this season. But, we’re hoping, as Pietro de Cortona depicted, that David prevails (we’ll settle for Foles bringing home a Lombardi Trophy though, rather than something – well – a little more violent). 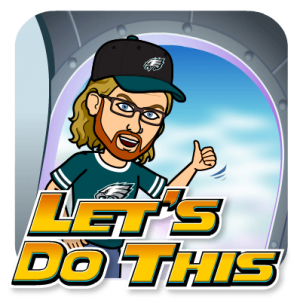 It’s David versus Goliath. It’s Hal Incandenza serving up an ace against John (no relation) Wayne at the Whattaburger. It’s Doug Pederson telling us “We shall fight on the landing grounds. We shall fight with growing confidence and growing strength in the air.” It’s Hermione Granger with Draco Malfoy in her way. You have to figure: it’s Philadelphia’s turn.

Article by William Repetto, a graduate assistant in the Communication and Marketing Dept. at the Falvey Memorial Library. He is currently pursuing an MA in English at Villanova University. (Graphics courtesy of Bitmoji, and Hunter and I spending hours perfecting our representations!)