This Falveydelphinovian blog showcases the students who find themselves situated in Falvey throughout the week, and in this case, students and professors who utilize other Villanova resources to foster our community.

This is Katrina Garzón, 4th-year student in the College of Nursing and Student Nurses Association of Pennsylvania (SNAP) President, and Professor Carol Toussie Weingarten, PhD, RN, ANEF, the adviser to SNAP (from left to right) – 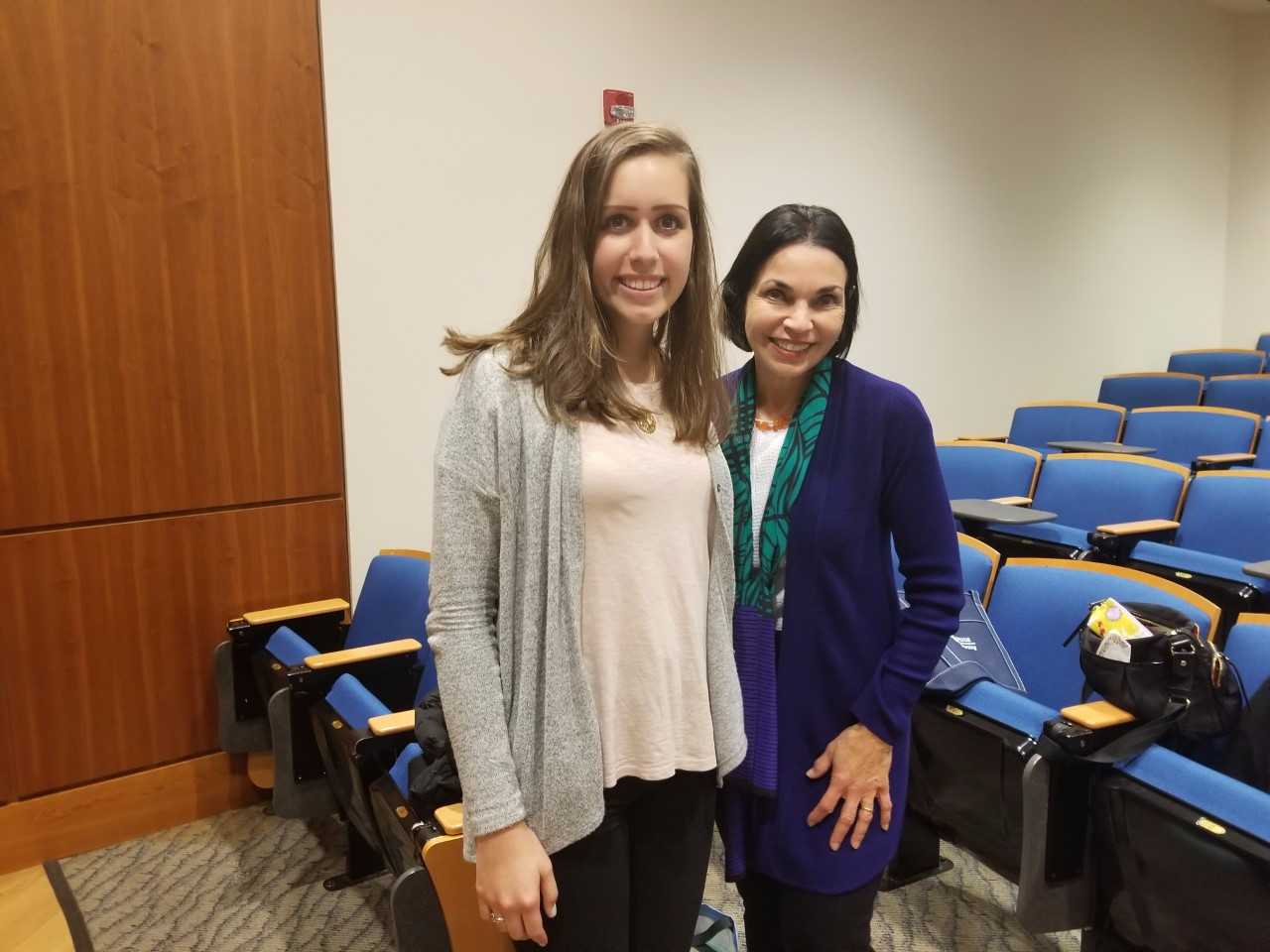 They were interviewed by Falvey’s Communication and Marketing team member, Liana Perez, in order to learn a little more about SNAP and its role at Villanova:

Liana: From the perspective of an adviser/student what is your favorite memory of being a part of SNAP?

Katrina: For me, I think my favorite memory of SNAP was when I ran for the state board, and they read the results for the state board. I was sitting in the last row, and I was just waiting for the results and then when they said that I had been elected to the position of secretary treasurer on the state board, everyone – the whole chapter – turned around and looked at me. I just felt the support of everyone. It was a very exciting moment.

Dr. Carol Weingarten: I think for me, [it’s] being advisor to a group that is now one of the largest and most active organizations in the United States, that started in a room with an echo and a handful of students. It is every moment that you witness a student’s leadership burst into being and you see people who start to appreciate what leadership is about. Becoming leaders within the group and then going on to graduate and become leaders within the nursing profession. And when I see them as chief executive officers, when I see them as people who are nurse practitioners, as people who have through their choices used leadership to bring together and inspire others, that’s my best moment, and I have many of them. And I think for anybody lucky enough to be an adviser as I have been over these years and to have the support of the Dean, Dean Louise Fitzpatrick, who was the founder of the chapter, and then empowered all of us, gave us the opportunity and made SNAP a college priority. She set the foundation for leadership and inspiration. And then what was my favorite moment? I can give you a million of them. As I see Katrina, who started as a freshman and served as an officer on the board and then the state board and then came to lead our chapter and the things that she has accomplished….wow. That I would have to say is another of my favorite moments.

Liana: How long have you been an adviser for SNAP?

Dr. Carol Weingarten: I have been the adviser for SNAP for about 30 years. I came as a young faculty member with a very young child, and the Dean and the students have been my inspiration, and when you’re at Villanova, you turn and 10 years have gone by already.

Liana: Since you’ve been here, how have you seen SNAP evolve?

Dr. Carol Weingarten: I have seen a parallel in the changes of [SNAP and the] changes in the nursing profession. And I have actually seen it be ahead of some of the changes because Villanova’s chapter connects to the state and to the national levels. And the folks who are involved at all these levels are and have become leaders of the nursing profession in health care.

Liana: Katrina, How has SNAP changed you as a nursing student since you have been involved?

Well I started as a freshman, and I went to the state national convention, and I was kind of just understanding the organization, and I explored different fields of nursing that I may be interested in but really taking on the position on the state board and the chapter board really fostered my leadership, and it has helped me in clinical, being a leader as well as a team player, and it also has completely changed my career path trajectory, completely from when I was a freshman, with my career goals in nursing.

Dr. Carol Weingarten: It has also had an impact on Katrina’s academic work because this semester she’s elected a credit-bearing independent study, a real course that she is designing on her preceptor, and she is focusing on leadership development linked to the Student Nurse’s Association, and her special interest area is the meaning of leadership in the top – that of president, what does it mean to be president? What does it mean to connect with a complex organization? SNAP is an example of it, but it’s also the one that she leads, and it is a very large and vigorous group.

Liana: Dr. Weingarten/Katrina, What are your goals for SNAP this year?

Dr. Carol Weingarten: I think this applies more to Katrina, but my goal this year is to be the adviser and see students become empowered.

Katrina: My goals from the beginning of my term were definitely to foster more cooperation among the board and keep up communication. I established monthly board meetings and [am] really trying to hear from our members and the board – what speakers they want to have at our meetings, so SNAP is really an association for it members – [and] other goals included our events and trying to collaborate more with special projects. I’m also considering reinstating the “Breakthrough for Nursing” director role on our chapter board, which I’m still discussing, just to have that more as a presence since that is on the national board. The main goal has always been just to make SNAP more of an opportunity to all nursing students here. We are a well-recognized and branded organization around campus and really help people in their nursing careers later on, as well as their leadership and professional development right now as they are in college.

Dr. Carol Weingarten: SNAP stands for: Student Nurses Association of Pennsylvania. We are connected with the state organization, which is also called SNAP and with the national student nurses association. And the group is dedicated to education, professional development, service and the forming of networks and friendships. With the planning of the group at this time, every single activity relates to at least one of these, so our meeting tonight focused on the topic of the interest of members in neonatal nursing. We have a longstanding relationship with the football team, and the meeting after next is going to be around Veterans Day, and that focuses on the “National Joining Forces” initiative, that is in support of active duty military, veterans and their families and the health care providers who care for them. So the athletic department and the football team partner with SNAP, and that’s an example of how we connect with other groups too. When you look at the meetings themselves, they always have a particular topic of interest. Sometimes, like tonight, it is unique to nursing; other times, like some of the upcoming meetings, it’s of interest to the entire campus. The professional development comes in the running of the chapter and the involvement at the state and the national levels and also in attending the state and national conventions and other conferences. For example, Katrina is going to be leading a bus-load of Villanovans to the state convention. And at the convention is a student congress that is called the House of Delegates; it deals will all kinds of professional issues – there’s an educational program, and there is an exhibit hall that features publishers, employers, different companies and everything focused on the needs of nursing students and the nursing profession. So students get an opportunity to network across the state and on the national level. [They] will be there with a large delegation of Villanova students and several thousand other chapter members. Our students get the chance to be involved with that. You heard tonight some of the many service projects. Some are short term; some have been going as far back as 1992. And then the networks and friendships are key to everything. And all of this is consistent with the message of Villanova University and National Student Nurses.

Liana: My final question is, When someone mentions SNAP, what is the first thing that comes to mind?

Dr. Carol Weingarten: And opportunity. This is probably one of, if not the most diverse group on campus in that those who attend our meetings include freshmen, sophomores, juniors, seniors, people in our alternate program –those are folks who transferred in, BSN Express, who have children who are older than the people who are entering Villanova. So SNAP represents the nursing profession in that you have people of different generations working together just like we would be caring for patients; here we are growing our profession. It is for students and by students. My role is as adviser I have my own professional association where I’m president and involved in, but this is totally by students.

Falveydelphinovian written and photographed by Liana Perez, team member of the Communication and Marketing team at Falvey Memorial Library.