I brought you a few journalistic sources on Octavius V. Catto in the “Highlighter” two weeks ago. We learned that his statue now graces downtown Philadelphia, the first statue in Philadelphia dedicated to a black individual. His work toward desegregating Philadelphia streetcars and educating black youths were indispensable to the empowerment of people of color within the city.

I’d like to highlight this week some of the scholarly and historical sources available to you on Catto through the Falvey. Many of these recommendations come to us via Merrill Stein, our Psychology and Brain Sciences/Political Science/Education & Counseling/ Public Admin./Naval Science/Geography & the Environment librarian. 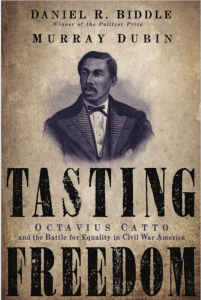 Cover of resource #1, “Tasting Freedom” by Biddle and Murray.

Did you know that Falvey has been honoring Catto since long before his statue was erected downtown? We hosted the authors of this very book way back in 2011! Within the pages of this one, you’ll find out that Catto’s closest contacts called him “O.V.” You’ll also read of a fascinating background that brought his family from Charleston to Philadelphia to Baltimore, almost to Liberia, then back to Philadelphia to narrowly escape arrest. This is not to say that the Philadelphia of the time was a freeman’s utopia. In fact, as you’ll read, Catto himself assessed the Philadelphia Streetcar situation at the time as a proponent of “the white ‘fantasy of our inferiority’” (328).

Need 19th-century newspapers to see firsthand evidence of the narrative presented in Biddle and Dubin? We got it. Within this expansive collection of newspapers from the 17th-20th centuries, you’ll find a particularly interesting one detailing the acts of Catto at the convention of the concurrent literary society – on a night when they voted for the “exclusion of negro delegates.” Find out why the meeting “adjourned amidst great confusion.”

For a shorter, albeit a very interesting biography of Catto, you can also visit this database. This one aptly concludes, “Despite his sad end, Catto’s trailblazing accomplishments in struggling to cripple institutional racial segregation, as well as enhancing blacks’ education and voting rights, made him an early example of the quintessential advocate of black empowerment.” You can also find lesson plans geared toward bringing African American Studies to the classroom on this database as well as a chronological guide to the Obama presidency.

You’ll find historical imprints in this collection! My favorite by Catto is a commencement speech given at the Concert Hall of the Institution of the Colored Youth. In it Catto boldly proclaims, “And we venture the belief, that had there been, through the Southern part of this country, a system of education for the masses, irrespective of class or color, exhibiting in its energy one half of the zeal which has, within those states, been exerted to keep the conscience unenlightened and the understanding uninstructed – we tonight would not be found at the crisis of a civil war.”

An ICY banner, once used by Special Collections, which also has interesting Octavius Catto resources.

From letters to poems to editorials, this database contains a plethora of primary sources. From them we can learn that Catto was quite the correspondent. Find out on this database why one of his pen pals wrote of one of Catto’s letters, “it gave me great pleasure to read and reread that long, and well [reasoned?] epistle. Yea! It filled my heart with joy.”