I’m trying something a little different for this “Highlighter” and next (which will be the week of Oct. 16). I’d like to bring you a two-part column that highlights our resources on a particular individual: Octavius Catto. He once made headlines for working to desegregate Philadelphia streetcars and for fighting for the extension of voting rights to Americans of African descent.

Recently, however, he has made headlines once again for becoming the first black individual person to have his memory commemorated by public statue in the city of Philadelphia. If you haven’t kept up on the news, I’ve compiled five stories here that are accessible through the Falvey Memorial Library via the ProQuest Newsstream Database. 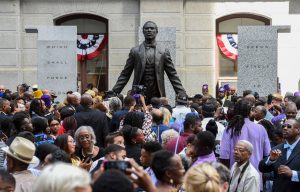 1. “Statue’s Message: Tribute to Octavius C. Catto, to be Unveiled Tuesday Morning, Will offer ‘A view into our history that has been largely ignored,'” by Stephan Salibury.

This article, as far as I can tell, offers a great journalistic glimpse into the life and legacy of Catto himself, but it also offers a comprehensive overview of the statue. Salisbury indicates that Catto was an “educator, scholar, writer, pioneering baseball player, and fearless civil rights activist.” According to Salisbury, the statue titled “A Quest for Parity” cost about $2 million with $400,000 still to be raised. Interestingly as well, according to “Statue’s Message,” the idea for the statue came to Mayor Kenney as early as 2003, while he was a councilman. This one appeared in the Philadelphia Inquirer on Sept. 26.

Highlighting the importance of symbols and storytelling, Jones’ articles demonstrates the fundamentals of good journalism. Jones speculates that the differences between white and black, and Democrat and Republican, can start to be broken down by public displays such as these. He also asks his reader to think about the work that still needs to be done concerning the Frank Rizzo statue. No matter where you stand on the matter, Jones’ article is worth the read. It was published by the Philadelphia Daily News on Sept. 27.

3. “Who was Octavius Catto, anyway?” by Tommy Rowan

A general overview of Catto and his actions, this article gives a good insight into the magnitude of Catto’s efforts. It might slightly exaggerate exactly what Catto accomplished himself, claiming he, “organized sit-ins and protests and successfully desegregated Philadelphia streetcars.” He certainly was an organizer and a protestor, but according to the other articles you’ll find here, Catto was a part of the movement that ended segregation on Philadelphia streetcars – he didn’t do it himself. The other achievements in this list, though, show you just how damaging the whitewashing of history can often be. “Who was Octavius Catto, anyway?” appeared in the Philadelphia Inquirer on Sept. 27. 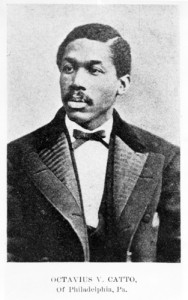 Even I’ve made it this far without telling you who actually made the statue. It was Branly Cadet! A Cornell graduate, Cadet believes the statue is a “testament to progress.” Jackson reports that “Cadet uses walls with a polished surface, highlighting Catto’s characteristics, along with color coated street car pillars.” For more on the man himself and the themes represented by the statue, make sure to give this one a read. It appeared in the Philadelphia Tribune on Sept. 24.

Appearing for the second time in our list, Salisbury put together an earlier article for the Philadelphia Daily New on Aug. 16 that discusses some of the anticipation leading up the statue’s unveiling. He also points out that the statues of black sports heroes that dot South Philadelphia are, in fact, on private ground. He also quotes Murray Dubin, co-author of “Tasting Freedom: Octavius Catto and the Battle for Equality in Civil War America,” which will be the topic of next week’s “Highlighter.”

This is the first part of a two part highlighter. I hope these news stories will catch you up on the excitement surrounding Octavius Catto (and demonstrate the journalistic resources available to you through the Falvey!). “Highlighter” will return on Oct. 16 with another post on Catto.