The Arthur Evanson Glanville, papers, 1916-1918, a recent addition to the Villanova Digital Library, comprise of wartime letters, written to family members before and during Glanville’s captivity, photo postcards of him as a R. D. F. Officer along sketches like Glanville’s drawing his trench dug out rendered shortly before his capture.

A portion of transcribed text below is from the digitized copy  of Arthur Evanson Glanville’s recollections, a WWI Irish POW, an officer in the Royal Dublin Fusiliers, captured by the Germans in France, May, 1918, and held as a prisoner of war for 7 months.

Glanville described the attempt of a POW’s escape from the camp in Rastatt. 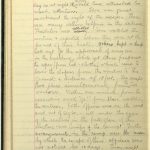 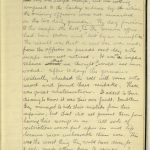 day as at night the <insertion: noise> would have attracted too much attention. There was great excitement the night of the escape. There were many willing helpers in the scheme. Their duties were [158]<insertion: allotted.> Some watched the sentries & reported when they were at the far end of their beats. Others kept a sharp look out for the approach of anyone in the building, while yet others prepared the ropes (from bed-clothes) which were to lower the elopers from the windows to the ground – a distance of 18 feet. The escape took place simultaneously from <insertion: the> two windows. Within one minute from the executive word “go!” from those watching the sentries, both officers were on the road and out of sight – all under the eyes of the sentries in the full glare of the electric-arc lamps of the camp! Further arrangements in the camp were the means by which the escape of these officers was not noticed for 10 days. Every night dummies were placed in the beds.

[159] This was simple enough, but was nothing compared to the lucky scheme by [160] which the missing officers were not remarked [161] on the two daily parades. The day previous to the escape the Roll <insertion: of prisoners> in the German office had been take and “lost” by an accomplice. The result was that a new one was made from the officers on parade next day & the escape was not noticed.  It was <insertion so> a simple a scheme [162] <insertion: that> we thought <insertion: it> would not have worked. After 10 days the Germans evidently checked the roll with some other record and found their mistake. There was great consternation. It added to their dismay to know it was their own fault. Doubtless they managed to hide their mistake from their superiors, but that did not prevent them from having their revenge on us. All sorts of restrictions were put upon us and life became more unbearable than ever. This was the worst thing they could have done, for it only made others keen to escape. In fact inspite [163] of all the extra precautions,