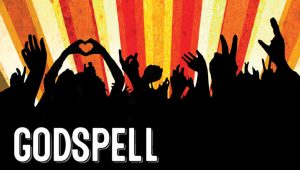 On Wednesday, Sept. 20, the Villanova Theatre kicked off its 2017-18 season with a showing of Godspell. In typical Villanova Theatre fashion, the show brought together an entirely prepared cast, beautiful stage elements and the type of evening that makes a particular viewer believe he has been transported downtown to the Avenue of the Arts.

When one enters the theatre for a production, he or she hardly expects to be greeted by the actors themselves. When one thinks of the Gospel, he or she hardly thinks of top hats and Chuck Taylors, bandanas and sneakers, or ball caps and cowboy boots. The Villanova Theatre’s rendition of Godspell forces one to reassess these expectations.

According to the press release put out by the theatre, “… Godspell arises from the idea of a group of performers coming together in an empty theatre to retell and rediscover this timeless story as vividly and immediately as possible.” Given the types of turmoil the country faces currently and the heightening drama playing out on the world stage, we might say that this is exactly the time for Villanova Theatre to bring this particular story to life.

The story begins with each actor portraying different philosophers and artists, each so certain of his or her system for understanding the world. Enter John the Baptist. Enter Jesus. And all of the sudden, the audience is treated to the various parables portrayed in such numbers as “Learn Your Lessons Well,” “O, Bless the Lord, My Soul” and “By My Side.” 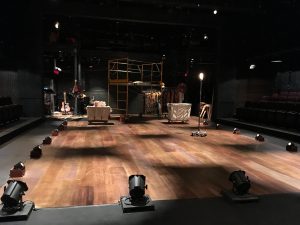 I think you’ll be surprised how much this stage can change throughout a performance.

As the morals become more layered and complex, the audience won’t miss the formal theatrical elements at work in this production. The costumes are fun for sure, but the set itself (pictured above) tells us something important about the modern lessons still to be found between the pages of the Bible. The lighting also shouldn’t be missed by anyone on campus. Climbing and towering Christmas lights along with the main lighting on stage make the audience wonder about Truth, about the light of Christ, about enlightenment, dare we say.

As the story unwinds toward that infamous betrayal of Judas Iscarot, many members of the audience will realize that they have become very comfortable with the gender-blind casting of the show. Mina Kawahara plays such a convincing Jesus and Megan Slater such a compelling John the Baptist (and Judas!) that, by the curtain’s close, not only does the audience forget that anything was out of place, but you also might find yourself believing that the story should have been told and retold with the incorporation of these marginalized voices throughout the ages.

Kawahara plays such a spirited rendering of Christ that it should have – nay, requires – special attention here. Kawahara brings such energy to the show that the cast seemingly revolves around the vitality of her performance. As we quickly discover, she plays the ukulele, too, and sets the beat for many of the numbers. Her bright smile, engaging attitude and confident voice will have you on your knees, in the palm of her hand, praying for more by show’s end.

If you don’t know this already, a number of the performers in Godspell play different parts or characters. Take for example, Kara Krichman who plays roles as diverse as a judge and a seed planted on a footpath. Her performance brings down the house with lines so gut-wrenchingly funny that the cast often had to wait for us to stop laughing to proceed with the show. Krichman will lure you in with the potential silliness of comedy, but, tread carefully – behind those silly jokes, you will find that Krichman brings to life something sincere behind the mask of farce. 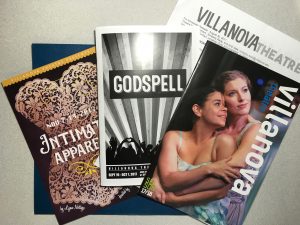 If you’re among the lucky few who get to review these plays, you’ll get a fancy press packet!

Sisi Wright, another ensemble member, does wonders for bringing the show to life as well. At one point Jesus asks her, “has no one condemned you?” This line launches the action into the most dramatic number of the piece, “By My Side.” Led by Wright and Heather Lemos, this number transcends the comedy of the rest of the show and gets you ready for those closing scenes. The combination of Wright and Lemos is no mistake; these two women will get you moving in your seat, clapping along, and then also bring you back down to earth in “By My Side.” Theirs is a performance you cannot afford to miss.

And how about a shoutout for Stephen Reaugh making his Villanova Theatre debut? I had the opportunity to see Reaugh in the Abbey Theatre Program showcase entitled “I’m All Wounds,” but he did not sing in that piece. For Godspell he brings that type of vocal talent that has you listening for his voice number-in and number-out. Pay close attention at the end of Act I and beginning of Act II for his solos, you won’t want to miss Reaugh’s gifts to the audience in “All Good Gifts” and the reprise of “Learn Your Lessons Well.” 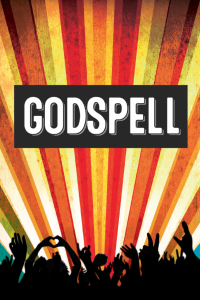 Falvey maintains a number of resources on Godspell particularly and gender-bending in theatre generally, including:

Wingo adds to these links that “…if you start searching for gender blind casting you’re going to find a lot of pieces talking about Shakespeare. Yes you had the ‘boy’ actors who played women when the plays were first written because women weren’t allowed to perform, but Shakespeare has also been very fertile ground for cross gender casting in modern times,” and she also directs our attention to two outside articles: An important question posed by americantheatre.org and a glimpse at the very production covered here.

According to Poley, “Gender identity in the theater and gender-neutral casting are hot topics.” If you are at all like me and sometimes shy away from those topics that might offend one side of the debate or the other, Poley reminds us, “The Library has many sources of information about the Bible and its interpretation” – best among these, perhaps, Poley’s own Biblical Studies Guide.