’Cat in the Stacks: A Conversation with Eboo Patel

The photo below shows Eboo Patel, author of One Book Villanova selection “Acts of Faith,” speaking in front of an entirely jam-packed Villanova Room. He covered topics from the type of interfaith work he has made his name doing to family and faith to the current political climate. Only a few hundred feet away, however, approximately five hours early, I had the pleasure of sitting with Patel and chatting about life, faith, and career since the 2007 publication of “Acts of Faith.” 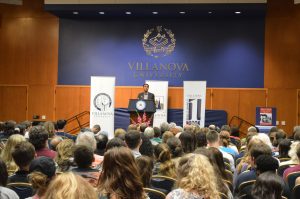 For those of you who haven’t quite finished the book yet, it details Patel’s story from normal childhood (filled with the difficulties of being a 2nd-generation immigrant) to politicization in college to religious conversion in the late ’90s before pursuing a PhD at Oxford as a Rhodes Scholar. The journey culminates with the establishment of the Interfaith Youth Core (IFYC), which flowered from a non-profit with $35,000 to, I thought, $4 million but that number is, in fact, “$8 million now” as Patel quickly corrected me.

In case you thought that Patel stopped changing and developing as both a believer and a social activist just because of the success of his non-profit, you’ll have to guess again. Patel’s interests adapt and change as the world around us evolves.

“The dimensions of diversity that I’m most interested in right now are what I would call the legitimate disagreements: the legitimate expression of one identity coming into conflict with the legitimate expression or understanding of another identity,” he said.  If you are at all like me, you’re surprised to hear this; shouldn’t an institution focus its energies and funds on the easily attainable? Patel has higher ambitions and said, “I find myself increasingly drawn to the difficult cases, to cases that don’t have easy answers.”

Speaking generally of the Trump administration, Patel iterated his answer to that very question: “One characteristic element of democracy is that views of people become a part of the governing arrangements. So how do I come to a better understanding of the stories and experiences and opinions of people with whom I disagree? I can still disagree with them and get a deeper understanding.” 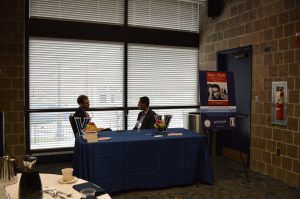 Eboo Patel sits for an interview with your ’Cat in the Stacks.

A continuity in Patel’s work, in books, other talks, and media appearances, is his stance that the United States presents citizens with an excellent opportunity to work on building bridges (emphasis on the building, as he has oft stated that “bridges do not fall from the sky or arise from the ground, we have to build them.”)

By way of example to prove this point Patel asked me, “Presumably there’s hospitals all over the country in which, within a surgery team, one surgeon voted one way and another voted the other, yet they still perform surgeries together. That’s actually a really important thing, right?”

I don’t know why such an exceedingly accomplished and amazingly kind gentleman would ask for my affirmation of his opinion. Patel does this frequently, though, in conversation. He never pontificates or frames things in the type of confusing academic diction that distracts attention away from the issue. In this rhetorical technique, one really senses his passion not only for the subject at hand but also for hearing your side of the story and getting you passionate about the topic as well.

He sees some obstacles in the modern world, however, about promoting such conversation between individuals. He stated, “It is easy over some forms of technology to offer a first opinion to the world without having to suffer the consequences of facing the people who you might be disparaging.”

He has said in the past that maintaining a positive tone rather than resulting to inflammatory comments about the other side can help overcome this obstacle. I asked if he stood by that view, and he responded, “I think a positive hopeful tone is absolutely amongst the most important things to do. Not everybody’s going to be like that; that’s fine. I think social change is the art of persuasion. I think very few people are hounded into changing their minds. I think most people are invited into becoming better.” 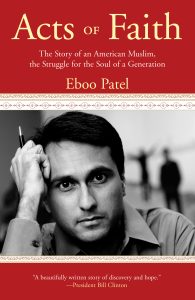 The cover of Patel’s Acts of Faith, 2017 OneBook Villanova selection.

In fact, the IFYC promotes the creation of cooperative spaces through this positive and hopeful tone: “A big part of what we talk about at IFYC is: what does it mean to be an interfaith leader? An interfaith leader creates spaces where people from different identities feel respected and welcome, where there are relationships between those different identities, and where there’s a commitment to the common good. Within difference expect disagreement; differences are not just the shades of purple that you like all the time, they are also things that you dislike – they’re disagreements.”

So how do we create space where we can come to understand and appreciate not only differences but also disagreements? Patel, before citing such authors as Dorothy Day and St. Augustine, refers us back to the concept of tone. “I think a big part of that is the tone of the leader – there’s no doubt about that. The leaders who I have the greatest respect for across human history are the people who invited others into being better.”

Part of the disservice we do to such influential people as Augustine and Day is regarding them as somehow above the rest of us. We forget that they dealt with some of the same day-to-day struggles that each of us encounter as human beings. I asked Patel if his lifestyle has given him some escape from the boredoms and sometimes petty competition of typical, adult American life. 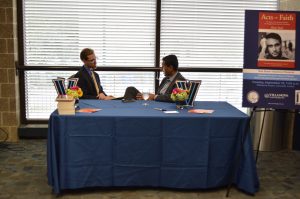 Sitting so close and chatting with Patel, one gets a real sense of his personal authenticity and the sincerity of his mission.

When I inquired if he would advise students to search out work that fulfilled these same criteria, Patel responded in his characteristically kind yet insightful way, “I would give that advice, but hopefully not in a way that sounds patronizing.”

Article by William Repetto, a graduate assistant in the Communication and Marketing Dept. at the Falvey Memorial Library. He is currently pursuing an MA in English at Villanova University. (Photos courtesy of Hunter Houtzer.)