Ryan Zalla, who presented a project titled “Economic Policy Uncertainty in Ireland,” comes to Villanova University from Pittsburgh, Pennsylvania. In the fall he will begin his Ph.D. studies at the University of Pennsylvania. He credits the following professors for his success and continued inspiration: Michael Curran, PhD (economics), John Immerwahr, PhD (philosophy), Mark Wilson, PhD (ethics), and Paul Danove, PhD (New Testament Studies). I recently had the opportunity to sit and chat with Ryan, and here are some excerpts of our conversation: 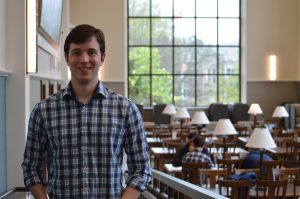 Ryan Zalla poses for a photo in the Dugan Polk Family Reading Room.

William Repetto: Why did you choose to attend Villanova?

Ryan Zalla: It was the community. When I first checked out Villanova, it was January, and it was like negative 10 degrees outside. I walked right out. But then I came back for admitted candidates weekend in April, and coming to Villanova and getting screamed at by the ambassadors and Blue Key at six in the morning. That was student passion like I had never seen before. The people at Villanova, they were intelligent, creative, passionate about their faith, about community in general. And that’s what really drew me here.

WR: And what about mathematics and economics? Why did you choose to study those?

RZ: It was really a fascination with how things work, especially with rationality and logic. Math is such a creative major where you take building blocks of stuff and build it on each other, just to make some really beautiful pictures, and economics was a really practical, applied way of applying math to the business world.

WR: Did math play a big role in your research? I ask because it sounds more on the economic side.

RZ: As far as using math in my work to do theory, that’s going to happen a lot. I’ll most likely balance the theoretical and empirical side going forward in my research.

WR: And that’s the case with your present piece?

RZ: This project was mostly empirical, and then the theory was analyzed in the result. So essentially I looked at keywords in newspapers in Ireland over the past 30 years, and these keywords were words such as ‘regulation,’ ‘deficit,’ ‘central bank,’ and where these words appear in newspapers with higher frequency tended to correlate with periods of high uncertainty. 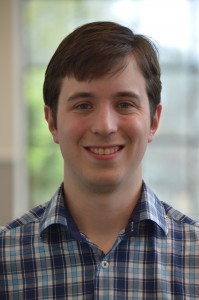 “Math is such a creative major where you take building blocks of stuff and build it on each other,” according to Zalla.

WR: What’s the most important conclusion to draw from your results?

RZ: This is the idea of it: to see which words elicit certain emotions of anxiety in consumers, investors, and businesses… The important take away from here is that the policymakers and businesspeople have to be aware of what’s being said to the public and how information dispersion can affect the economy.

WR: What are some of your interests outside of academics? What sort of extracurriculars are you involved in?

RZ: The big ones were I was an Eagle Scout in high school. I also did my black belt and played saxophone in the marching band. Then coming to Villanova, I’ve been pretty involved in the Move Above the Influence Group, which promotes non-alcoholic social activities for students. I’ve also been a member of Villanova Ambassadors as well as Honors Ambassadors. I was at one point last year, a member of the dean’s academic reform committee for the College of the Liberal Arts and Sciences. I also started a society last year: the Villanova Society of Actuaries. I’m also an RA.

WR: So what led you to the Falvey Scholars Program?

RZ: I use the Falvey Memorial Library a lot, because Villanova provides access to just about every research article and database out there. I was able to use those a lot to come up with my ideas, do my literature review and complete my project. Dr. Michael Curran noticed that the Falvey Scholars could be a good fit for me, and he forwarded the information.

WR: Then the Falvey Memorial Library has played an important role in your collegiate studies so far?

RZ: I just know that the Falvey Memorial Library is where I did most of my research and has been a very valuable resource along the way… Here at Villanova it’s my favorite place to study. I especially love the new reading room – being there at three in the morning no longer feels as creepy as it once did.