Danielle Sens-Castet comes to Villanova from Pearl River, New York. She was selected as a Falvey Scholar on the nomination of two separate projects, one in biology and the other in French and Francophone studies. She credits Professors François Massonnat and Dennis Wykoff for playing an important role in her success. I recently had the opportunity to chat with Sens-Castet about her work in biology, French serial killers, and her plans for the future. You’ll find excerpts of the conversation below. 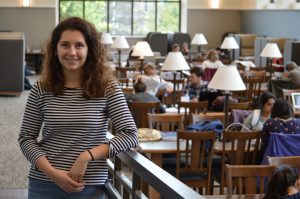 Sens-Castet poses for a photo in the Dugan Polk Family Reading Room.

William Repetto: You were nominated for two projects. Congratulations. What can you tell me about your majors and your projects?

Danielle Sens-Castet: My majors are biology and French and Francophone Studies. My French project is looking at serial killer narratives and then my second project, which I did for biology, for my thesis, is about the thymine biosynthesis pathway and the importance of a regulatory factor called THI3 across particular yeast species.

WR: I’m not a science person. Can you explain your biology project to me as a total outsider?

DS-C: THI3 is this thing called a regulatory factor, so it’s able to control these proteins that bind to DNA to either turn on genes or turn off genes, so I look at THI3, which helps control and regulate thymine genes. If you need to make thymine, THI3 binds to this other factor to bind to DNA to then make thymine. If you don’t need to make thymine, then it’s not going to bind. I’m looking at different species because different species have different regulatory systems.

WR: And what has been your favorite part of this kind of work?

DS-C: Working with the people in the lab, I love the people who I’ve worked with. I’ve been fortunate enough to work in this lab that has such great people – Dr. Wyckoff is such a great adviser. We have our lab coordinator, Christine Iosue, and all the undergrads and grad students who work there have been great. I also like looking at the sources first and looking into the background. Definitely Falvey has been useful, especially the website. 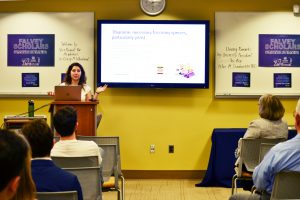 WR: This all sounds very different from your French project. Can you talk a little bit about your work on French crime film?

WR: Was Le Boucher the only film you wrote about, then?

DS-C: I picked two more modern films. One is called La Prochaine Fois Je Viserai le Cœur (“Next Time I Will Aim for the Heart”), but the interesting thing is that film was set in the late ’70s, a little bit after Le Boucher. Then I also watched L’Affaire SK1, which is “Serial Killer One.” That was interesting because it was actually based on a real life serial killer called Guy Georges who terrorized Paris during the ’90s.

WR: So what do these two projects add up to for you? What do you think your future holds?

DS-C: I originally thought I wanted to go into the healthcare field or something related to that, but I’m realizing I don’t. So I’m trying to figure out what I want to do, if I can incorporate biology and French together, or at least science and French that would be awesome, or even science and languages.