Anna Briker comes to Villanova from nearby Abington, Pennsylvania. Speaking of her time in school growing up, Briker reflected, “I really liked to read; I don’t know what else to say other than I really, really liked to read. I had a lot of really great teachers.” She credits  Aimee Eggler, PhD, assistant professor, Biochemistry Program, here at Villanova for her ability to participate in the Falvey Scholars program. Anna said, “The support of my mentor was really important, and I just appreciated her taking me in and teaching me, and now I’m excited that I get to present and am graduating,” in a recent conversation, which you will find excerpted below. 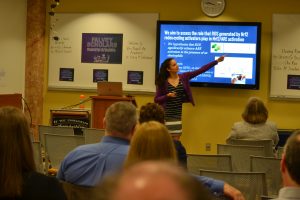 William Repetto: You’re a biochemistry major, and I’m an English major. Can you explain your projects to me in terms that I would understand?

Anna Briker: There are genes in our bodies that produce proteins that can protect us against all sorts of stress, and they are detoxifying, which is a big buzzword now. They can really help prevent disease. We’re studying a protein that activates a system, a protein that is naturally able to take advantage of the detoxifying proteins in our body and activate them. We’re really interested in how the foods that we eat are able to play into this system as well.

WR: And what is the methodology for this kind of work?

AB: We use cells that we grow in the lab and have different experiments. There’s one called a Western Blot. We can also measure the activation of the genes through a cool system that produces light in the same way as a firefly.

WR: You sound really enthusiastic about your work in the lab. Was that your favorite part of the project?

I like to be in lab and be doing things, like pipetting, because it’s really satisfying when you finish something after you’ve physically completed it. I also like, once we have the data, to kind of pull it together into a story, but that’s really difficult. 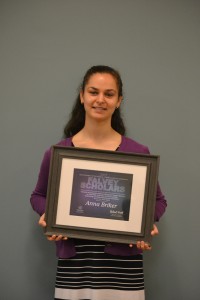 Briker poses with her certificate for being a Falvey Scholar.

WR: Did Falvey play any kind of important role in your work?

AB: Obviously we generate a lot of our own data, so the research data that I’ll be presenting is stuff we have for ourselves, but to understand it, we have to put it in context with what other researchers are doing across the country and sometimes across the world. The library resources played a really big role in allowing access to databases and articles. I think we have over 100 articles as references for this one project.

WR: With all the hands on work and reading, this project must have taken up a lot of your time. Do you find the space for any extracurricular activities?

AB: Growing up, I did ballet, and that was my main extracurricular because I was really involved in it. I was involved in Villanova Student Theatre, but I have since retired. I’m really involved in the Service Learning Community, which is for sophomores, but juniors and seniors can be facilitators.

WR: So what does this all add up to you for you? What’s next after Villlanova?

AB: I’m going to medical school next year. Research definitely influenced my decision, and the interplay of research and developing relationships with people and patients and giving back to the community is something that I thought were really tied up together in the career of a physician. I’ll be going to Northwestern.