Kathleen Boyce comes to Villanova from New Hope, Pennsylvania. She’s a recipient of the St. Catherine of Siena Peace and Justice Research Award. She hopes to attend graduate school in the future, with Princeton University as her first choice. “That’s the dream,” she told me in a recent conversation. You’ll find excerpts from the rest of the conversation below, where we covered her Falvey Scholars project, her other activities on campus, and the role the library has played for her. 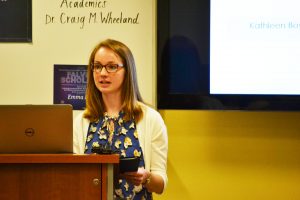 William Repetto: Can you tell me about the project you were nominated for? And what are your majors?

Kathleen Boyce: My project is on the 1936 Berlin Olympics; I am looking at the Olympics from the perspective of the United States boycott movement in the context of US racism at the time. It’s entitled “America’s Youth Go to Nazi Germany: The Movement to Boycott the 1936 Berlin Olympics and the Racial Divide in American Society.” I’m a double major in history and peace and justice studies.

WR: And what did you end up finding out about the United States’ perspective?

KB: I ended up shifting my focus as I began looking in the sources more, and I began seeing how huge this boycott debate was and the way in which US racism was used throughout the debate ­– and the irony of the US saying, “we’re going to boycott the 1936 Olympics because the Nazis are racist,” when in 1936, in Jim Crowe America, a lot of the athletes were experiencing racism at that time.

WR: That sounds like a project that incorporated elements from both of your majors. 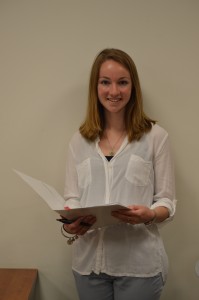 Boyce poses for a photo as a newly inducted Falvey Scholar.

KB: It’s been a goal of mine for a while. I guess: freshman year. I remember seeing the flyers they hang downstairs with all the topics and thinking, “I’m going to do that.”

WR: How else are you involved on campus?

KB: On campus, I really prioritize my schooling. I’m not super involved, but I am in the academic reform committee, which is a committee that was formed by Dean Lindenmeyr a few years ago to look at academic life within the College of Liberal Arts and Sciences and how we can improve academic life, whether through the curriculum or just through better marketing. I’ve also done some things with the admissions office; I was a tour guide over the summer when I was doing my research project, and I worked as an ambassador for a while as well.

WR: And how has the library been a part of shaping your Villanova experience?