The 2017 Mannella Lecture – Ninth in the Series 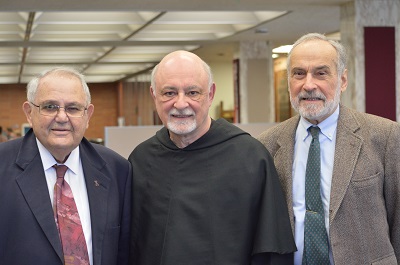 Editor’s note: An earlier version of this article appeared on  April 3, 2017. We are committed to accuracy and have made appropriate corrections. We apologize for the errors and always welcome input about news coverage that warrants correction. Messages can be e-mailed to alice.bampton@villanova.edu or call (610)519-6997.

The Rev. Michael Di Gregorio, OSA, Prior Provincial of St. Thomas of Villanova Province, presented “The Birth of a Mission to South Philadelphia Italians:  A Friars’ Tale,” as the 2016-2017 Alfred F. Mannella and Rose T. Lauria-Mannella Endowed Distinguished Speaker Series lecture on March 29 in the Speakers’ Corner of Falvey Memorial Library. His talk focused on the formation of the Italian-Augustinian Mission to the immigrants of Philadelphia at the start of the twentieth century. Father Di Gregorio is the most recent in a series of local scholars of the Italian-American community to present a lecture in the series.

The Alfred F. Mannella and Rose T. Lauria-Mannella Endowed Distinguished Speaker Series began in 2009 and celebrates Italian-American history and culture. The lectures are made possible by the generous support of Alfred S. Mannella, ’58 VSB, and honors his parents. Alfred S. Mannella’s father, Alfred F. Mannella, was the son of immigrants; he (Alfred F. Mannella) grew up in Philadelphia and became a tailor. He became interested in Villanova football in the 1930s. Rose T. Lauria-Mannella was the grandchild of immigrants; she grew up in South Philadelphia.

Alfred S. Mannella, the donor of the Endowed Distinguished Speaker Series, was a commuter to Villanova during his student days and found the Library was a perfect refuge between classes. After graduation from the Villanova School of Business, he worked in industry, eventually becoming the CFO and later president of a mid-sized multi-national corporation. Company mergers and acquisitions led to his roles in senior management and as a CEO before he retired to Florida . Mannella attended this year’s lecture.

Richard N. Juliani, PhD, now professor emeritus, Dept. of Sociology and Criminology, gave the first lecture, “The Italian-American Experience in Philadelphia.” Dr. Juliani spoke again in 2016 on “The Forgotten War:  Little Italy in World War I.” Other speakers’ topics have been varied – an Auschwitz survivor, embroidery, immigration, media and the Mafia, a mine disaster – but all were related to Italian-American history and culture.