“Little Women” at Villanova Speaks Louder Now Than Ever

On Wednesday, Mar. 29, “Little Women” opened at the Villanova Theatre. As the theatre opened, a talkative crowd entered the mostly full house. People reminisced about reading L.M. Alcott’s “Little Women” novel in high school or seeing an “adorably young Christian Bale” in the early ’90s filmic adaptation of the story.

A tiered stage greeted the audience, which, as it so turned out, played an important role in the story’s frame narratives. In addition, and as you can see in the photo below, a single window pane design lit the center stage, reminding the audience that this play offers a glimpse into only one of the many families that struggled through the Civil War and into the imagination of only one of many strong, creative young women of the time. 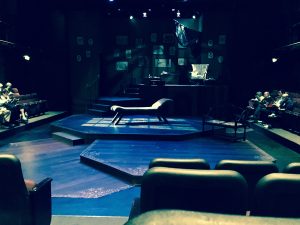 A preview of the stage.

For those of you unfamiliar with the story, “Little Women” recounts the personal struggle of Jo March (Laura Barron) to get her stories published during the immediate post-Civil War years. The majority of the musical’s action, however, occurs during the Civil War, while Jo and her three sisters (Kara Krichman, Allyce Morrissey, and Jaclyn Siegel) struggled to keep together as a family in the midst of turbulent times.

The show opens with Jo singing to Professor Fritz Bhaer (Dan Cullen) about her “blood and guts” novel in the thrilling and somewhat comedic number “An Operatic Tragedy.” As Barron and Cullen brought the emotions of the lyrics to life, the audience was treated to a staging of the novel as the daring Braxton and Rodrigo duel it out on stage. After finding out that her novel has been rejected from another publisher, Jo asks how she can be “Better”?

You’ll find some irony in this question after watching the entirety of the performance, because the only way that Barron could be better is if she brings her talents to the big stage or the big screen sometime soon. From “An Operatic Tragedy,” we travel back to the years leading up to Jo’s big move to New York City, when she lived home with her family in Concord, Massachusetts. 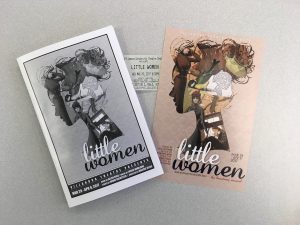 The lovely cover design of the playbill and my ticket!

In Concord you’ll be pleased to meet the “iron-willed” Mr. Laurence, portrayed by Kevin Esmond, the other March sisters – Meg (Krichman), Beth (Morrissey), and Amy (Siegel) – and their “Marmee” (Lexi Schreiber), and the delightfully awkward young Mr. Laurence (Chris Monaco), but you can call him Laurie. As it so turns outs, these townsfolk are Jo’s own supporting cast, her “Little Women,” for whom she speaks the loudest.

A romance develops as well as the young Laurie proclaims “Take a Chance on Me,” in a piece marvelously brought to life by Esmond who stepped so naturally into a character willing to speak his mind. But will the romance be requited? And why has the hard-faced, older Mr. Laurence began spending time with the much younger Beth March? While their duet, with its catchy rhythm and pleasing vocals, will have you tapping your feet and wanting to sing along, you’ll certainly begin wondering how they can be “Off to Massachusetts” if they’re already there.

Jaclyn Siegel, with her extremely nuanced and impressive subtle acting skills, will keep you wondering what’s next for the at-once mischievous, loving, and sophisticated Amy March, the youngest of the siblings. After taking in her superb performance, you’ll be shocked to pick up your playbill and learn that Siegel’s not, in fact, a theatre student at all; she’s a student in the Psychology program, earning her M.S. before heading off to London, Ontario in the fall for her Ph.D. in Social Psychology. 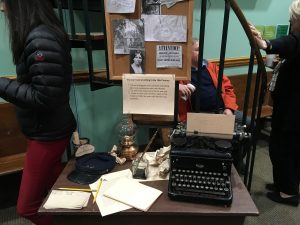 The solemn second act will bring you elation and triumph before bringing you back to earth with the full cast number “The Weekly Volcano Press.” You’ll enjoy the curious yet lovable Professor Bhaer, and find that actor Dan Cullen excellently brings out the professor’s German stoicism. You’ll cry when you hear “Some Thing Are Meant to Be” and you’ll dream of loved ones when you stand under a “Small Umbrella in the Rain,” but, all things considered, you’ll want to thank those “Little Women” in your life who have helped you get where you are; you’ll want to write a daring novel of your own; and you’ll certainly want to come back again and again for Villanova’s latest theatre hit.

The show runs through April 8, and you can purchase tickets here.

Some of the actresses and actors were nice enough to sit a chat with me after the performance – including Laura Barron (Jo), Chris Monaco (Laurie), and Michael Franz (Chorus). I was lucky enough to hear about their production process, their relationships with their characters, and their personal plans after “Little Women” and after Villanova.

This particular production of “Little Women” took under 40 days to bring from empty theatre to impressive opening night. Barron said, “It seems so fast; it’s not so much different from some professional timelines, which are even faster than that. But for a show of this size – music and staging and special effects and fighting – it’s amazing that it came together this quickly.”

In the course of those few weeks, however, Barron’s relationship with Jo the character had time to develop and change. Barron reflected, “She’s a character who goes through the whole show. She goes throughout the whole thing; it’s very intimidating.”

Despite this intimidation, though, Barron credits her fellow cast members with helping her through the process and confidently said, “I really was at peace with knowing that I might not be able to embody the exact Jo that someone else has seen in their world, but I would bring my own spirit and heart and joy and love of her spunk and her fight to the role.” 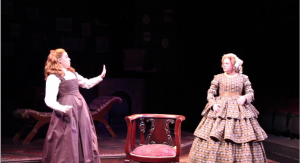 Monaco reflected on a similar development over the production process. He said, “My first experience with Laurie was sitting down with the script and listening to the soundtrack.” While he started out just getting introduced to the character, Monaco also mentioned, “I’ve played a few roles like Laurie before; I think I found out in the past two weeks or so that Laurie also has to grow up in the show. Something just sort of fell right into place for me.”

Speaking, I think, for both himself and the audience, Monaco concluded, “It was really lovely getting to know him.” 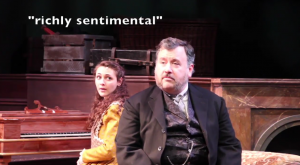 While both Barron and Monaco plan to continue directing, teaching and acting (including in their final production of the school year, “The Gambler”) themselves after Villanova, Franz reminded me that some theatre majors stay in academics.

“Next for me,” he said, “is completing my thesis, graduating on time, and hoping to enter a Ph.D. program in the fall.” If you’re wondering where one can go to get a Ph.D. in theatre, so was I. Franz mentioned, “Florida State University has a really good program for theatre and performance studies… and it seems like a really good program; they do a lot of mentoring and offer a teaching fellowship, which would be wonderful because I do want to teach some day.”

The academic side of theatre reaches beyond the classroom as well. All of the actors mentioned the role of libraries in their process. “Libraries give us so many resources for a historical piece like this,” Barron reflected, “to be able to find out more about the world that these women grew up in. You cannot do theatre without being well-read and knowing a lot of things you would find through libraries and reading.”

Monaco reflected on the importance of libraries to his own personal process and said, “There’s no place that I find more relaxing and peaceful than being surrounded by actual, hard copies of books.” Franz, too, said, “The library for me is a perfect place of solitude.”

Accordingly, Falvey English and Theatre Librarian Sarah Wingo curated some resources from the Falvey for you to explore to inform your viewing of “Little Women:”