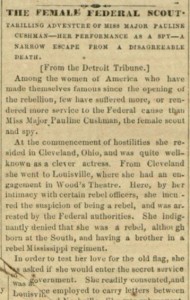 The transcribed portion of text is from the digitized copy in the Montgomery Historical Society of Montgomery County Collection.

Among the women of America who have made themselves famous since the opening of the rebellion, few have suffered more, or rendered more service to the Federal cause than Miss Major Pauline Cushman, the female scout and spy.

At the commencement of hostilities she resided in Cleveland, Ohio, and quite well-known as a clever actress. From Cleveland she went to Louisville, where she had an engagement in Wood’s Theatre. Here, by her intimacy with certain rebel officers, she incured [2] the suspicion of being a rebel, and was arrested by the Federal authorities. She indignantly denied that she was a rebel, although born at the South, and having a brother in a rebel Mississippi regiment. . . . .