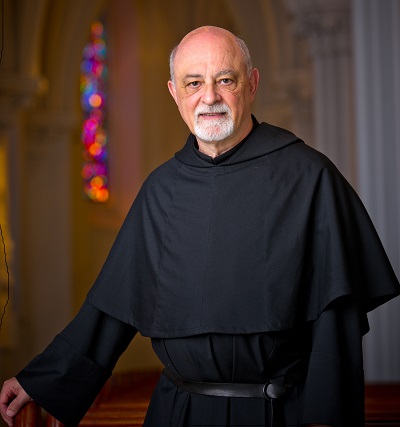 The Rev. Michael F. Di Gregorio, OSA, Prior Provincial of the Province of St. Thomas of Villanova, is the speaker at this year’s Alfred F. Mannella and Rose T. Lauria-Mannella Endowed Distinguished Speaker Series. Father Di Gregorio’s topic is “The Birth of a Mission to South Philadelphia Italians:  A Friar’s Tale.” He will expand on an article he wrote for Analecta Augustiniana titled “The Mission of the Italian Augustinians in the United States, The First Thirty-Five Years:  Laying the Foundation.”

“As an Augustinian,” says Father Di Gregorio, “I am greatly interested in the history of our Order, which includes here in the United States significant ministry among Italian-Americans. The Augustinian way of life is built upon the two pillars of action and contemplation. Trying to be faithful to both is the invitation of each day.”

The event will be Wednesday, March 29, at 1:30 pm in the Speakers’ Corner, Falvey Memorial Library. The Mannella lecture is free and open to the public. Light refreshments will be served.

Father Di Gregorio, a native of Staten Island, N.Y., is a graduate of Villanova University, earning his Bachelor of Arts degree in Philosophy. He attended the Augustinian College, Washington, D.C., and received his Master of Arts degree from Washington Theological Union.

Father Di Gregorio spent 29 years in parish ministry in the Province of St. Thomas of Villanova. He has also been involved in formation work for the province and, from 1990 to 1992, he was the Director of Communications for the Augustinian Order, assigned to the Augustinian General Curia in Rome, Italy. Father Di Gregorio was the Director of the National Shrine of St. Rita of Cascia, Philadelphia, from 1992 to 2007. He has been the Assistant General of the Order of St. Augustine, a member of the General Council, the Vicar General and in 2014 he was elected Prior Provincial of the Province of St. Thomas of Villanova.

Photograph courtesy of  Teddie Gallagher, Director of Communications and Editor of The Augustinian, Province of St. Thomas of Villanova.