“Blood and Soul: The Russian Revolutions of 1917” – A Colorful and Educational Exhibit 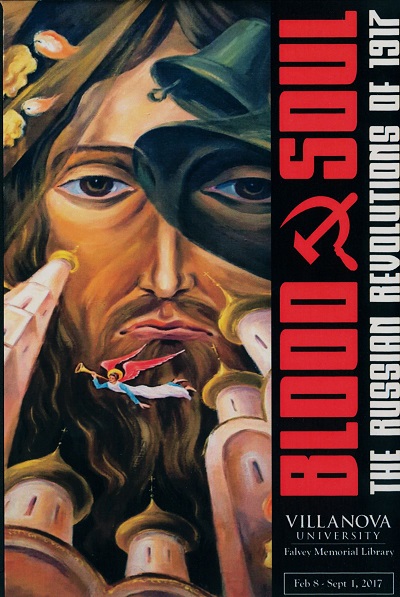 “Blood and Soul:  The Russian Revolutions of 1917” exhibit opened in February and will remain on display through September 1. The exhibit is cosponsored by Falvey Memorial Library and the Russian Area Studies Concentration Program (Rascon). The Rev. Richard G. Cannuli, OSA, director of the Villanova University Art Gallery and curator of the University’s art collections, and the Very Rev. John J. Perich, curator of the Metropolitan Museum of the Orthodox Church in America and St. Tikhon’s Monastery and Seminary Icon Repository, South Canaan, Pa., curated the exhibit. “Blood and Soul” commemorates the centennial of the Russian revolutions and the Enthronement of St. Patriarch Tikhon of Moscow . John E. Pusey created the graphics for the exhibit.

The exhibit, “Blood and Soul,” fills eight cases and both large windows between Falvey’s main floor and Holy Grounds. Eighteen posters, designed by Pusey and accompanied by informative materials such as “The Romanov Family” and “The February Revolution” are in the windows at the back of the first floor.

Artifacts on exhibit include both secular and sacred, vestments, clothing, enamels, folk art, photographs, books, icons and more. The artifacts are separated into Imperial Russian and Soviet Russian, indicated by the flags covering the bottom of the cases: red soviet flags and yellow imperial flags. Sheets explaining aspects of the exhibit (enamels, icons, etc.) are on the cases. Visually and intellectually appealing, this exhibit is well worth several visits. 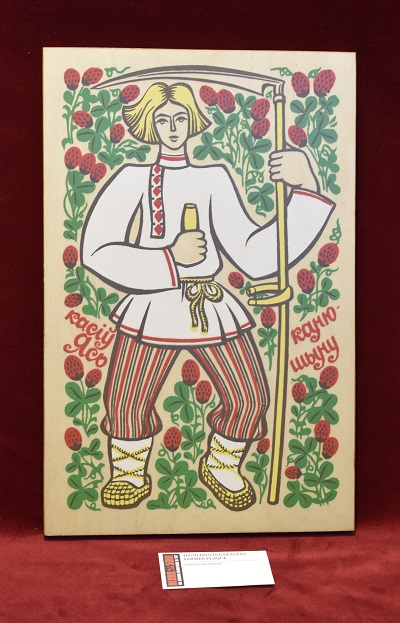 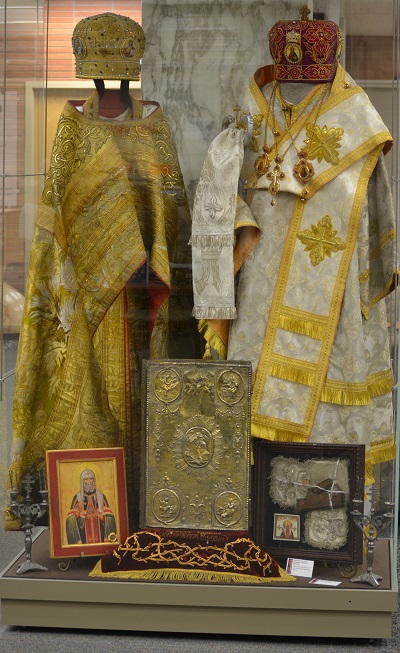 Falvey’s Digital Library recorded a video tour narrated by Father Perich; we recommend viewing it to help you understand the exhibit.

As part of the centennial commemoration of the Russian revolutions and the Enthronement of St. Patriarch Tikhon of Moscow there will be occasional lectures and programs while “Blood and Soul” is open. On Monday, March 27, 7:30 pm, in the Connelly Center Cinema “Heart of a Dog (1988), a Soviet television film will be shown. On Thursday, April 20, 1 pm, in the Idea Accelerator, Falvey Memorial Library, Semion Lyandres, PhD, University of Notre Dame, will present a lecture, “How an Uprising Became a Revolution:  Rethinking the Politics of Russia’s 1917 February Revolution.” Both events are free and open to the public.

The Russian revolutions have been extensively studied over the past one hundred years. While social unrest was widespread all over Europe in the 19th and early 20th centuries, it came as a surprise that Russia would be the first state to adopt communism as its political framework. Russia saw three major revolutions in a relatively short time span. The revolution of 1905 and the February and October revolutions of 1917. The October revolution and the subsequent foundation of the Soviet Union significantly influenced world politics.
Here is a selection of sources that explain and explore Russian history and the Russian revolutions.

Encyclopedias, companions and handbooks are generally a good starting point to gain a basic understanding:

Monographs in the Falvey collection: at Falvey:

U.S. Congressional Serial Set, 1817-1994
Includes a 3 volume set of Department of State Papers related to foreign relations with Russia during this time period.

Historical New York Times Archive Follow the revolutions as they unfolded in front of the eyes of the American public.

Opinion Archives This resource includes America’s leading opinion magazines, ranging from the Nation, to the New Republic and the National Review. The following article from May 1917 published in the New Republic focuses on the incidence of revolution in the world, the destruction of capital and its consequences. 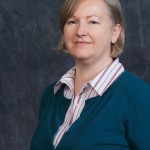