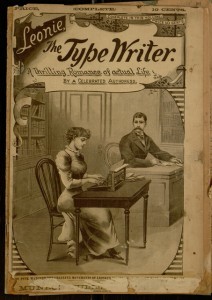 Our latest Project Gutenberg / Distributed Proofreaders eBook release is Leonie, the Typewriter, a self-described “thrilling romance of actual life” about the startling adventures of a young woman who operates a typewriter. First serialized in the New York Family Story Paper in 1890, and later reprinted as a stand-alone pamphlet, this is a good example of the period’s story paper melodrama, mashing together romance, crime drama and tragedy in an effort to appeal to a broad range of readers.

It is often commented that disguise was a significant trope of this period, and that these stories may have helped to break down traditional cultural barriers. Leonie nicely exemplifies this trend, with its female protagonist disguised as a boy for a good portion of the story, and students of gender studies will likely find the portrayal and some of the plot consequences quite interesting. The story is also remarkably fast-paced, wasting no time in getting to the melodramatic twists and turns, and featuring a few memorably horrific moments before reaching its inevitable happy conclusion.

The entire text of the novel may be read online or downloaded through Project Gutenberg.