Killed in a Duel 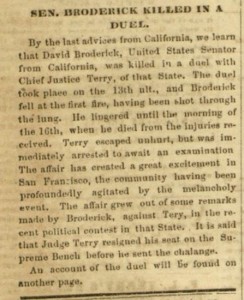 Annotated and transcribed text from the digitized copy in the Historical Society of Montgomery County Collection.

By the last advices from California, we learn that David Broderick,(2) United States Senator from California, was killed in a duel with Chief Justice Terry,(3) of that State. The duel took place on the 13th ult., (4) and Broderick fell at the first fire, having been shot through the lung. He lingered until the morning of the 16th, when he died from the injuries received. Terry escaped unhurt, but was immediately arrested to await an examination. The affair has created a great excitement in San Francisco, the community having been profoundly agitated by the melancholy event. The affair grew out of some remarks made by Broderick, against Terry, in the recent political content in that State. It is said that Judge Terry resigned his seat on the Supreme Bench before he sent the chalange. (5)