eBook available: The Prince of the House of David 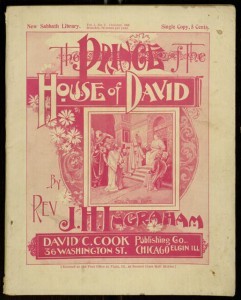 Our latest eBook release, produced with the help of Distributed Proofreaders and published through Project Gutenberg, is the New Sabbath Library edition of The Prince of the House of David by Rev. J. H. Ingraham. This novel tells of the events leading up to and immediately following Jesus’ crucifixion, as described by the letters of a young woman named Adina. Its author, who first became well-known by writing sensational adventure serials, is now probably best remembered for the fact that another of his epistolary novels, The Pillar of Fire, helped inspire the iconic film, The Ten Commandments.

It is important to note that this edition of the novel is not the author’s original version; instead, it has been (as the editors put it) “thoroughly revised and in parts rewritten, all unnecessary repetition appearing in the original edition of the book being omitted.” This opens up some potentially interesting avenues for study. The very successful original version of the novel likely reflected and informed popular views of Christianity in the mid nineteenth century. The changes made in this later “cheap” edition (designed for use in Sunday schools, and taking advantage of some of the publishing practices of contemporary dime novels) may also reveal some interesting things about the culture of the time.

If you want to investigate further, the entire New Sabbath Library edition of the book may be downloaded or read online through Project Gutenberg. The original version can be found in the Making of America collection if you are interested in comparing the differences.