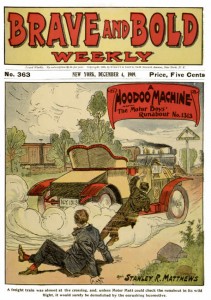 Today’s new Project Gutenberg / Distributed Proofreaders eBook release is something of a milestone: the thirty-fourth and final Motor Matt adventure, A Hoodoo Machine; or, The Motor Boys’ Runabout No. 1313. We released an eBook of the very first story in June of 2014, so it has actually taken more than twice as long to produce digital versions of these stories than it did to write and publish them in the first place; the entire sequence of adventures was first printed between February and December of 1909, and according to the author’s autobiography, they were written quite swiftly (and for only $75 each).

This final adventure sees Motor Matt acquiring a seemingly cursed car (which he cannot resist trying to fix). Predictably enough, it leads him and Joe McGlory into a new round of trouble related to Joe’s potential gold mine claim. In the end, a couple of brief paragraphs bring the whole series to a happy conclusion, though many loose ends — especially Motor Matt’s mysterious background — remain unresolved. It is not particularly surprising that the series ended when it did — the author had just about run out of new motor vehicles for Matt to aspire to run — but at the same time, he had clearly allowed himself plenty of contingencies for new plots had the publisher demanded more.

As a body of work, the Motor Matt adventures have to be viewed for what they are: hastily-written juvenile fiction reflecting the commercial demands (and many of the prejudices) of the early 20th century. Within these constraints, however, the author has delivered significantly more variety in action, plotting and characterization than the formula strictly demanded, also capturing some of the spirit of a time of rapid change in the process. The books also offer a fascinatingly conflicted blend of broad, offensive stereotyping with messages of tolerance and cooperation. It is hard to say just how much cultural impact these stories had — given its brief existence, it is certainly far from being one of the best-remembered dime novel series — but it nonetheless serves as a time capsule worthy of study. With the completion of this eBook conversion project, such study is now easier than it ever was in the past!

The final story, along with all the rest, can be read or downloaded through Project Gutenberg.