On Thursday, Nov. 17, Political Science Department Chair Matthew R. Kerbel will visit the Falvey Memorial Library to give a talk about moving forward after this year’s turbulent presidential election. His background in studying the effects of media on American politics make him eminently qualified to be dissecting this year’s contest between Hillary Clinton and Donald Trump. 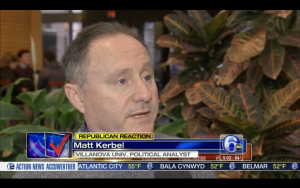 Kerbel appearing on a local media station (courtesy of 6abc.com)

Written almost two decades ago, these words contain an even more powerful truth in today’s world. From his “Remote & Controlled: Media Politics in a Cynical Age,” this insight demonstrates Kerbel’s keen eye for the nuances of contemporary political discourse, a discourse which has shifted dramatically during Kerbel’s 30-year career.

Of course, Kerbel’s expertise on American Politics, the Presidency, and the media go back before the 1990s. Early in his career, he published on the presidency of Gerald Ford. In this piece he argued that a president’s news exposure varies with the political climate. He continued his research throughout the ’90s, even scoring coverage by Villanova’s own newspaper, the Villanovan in 1992: 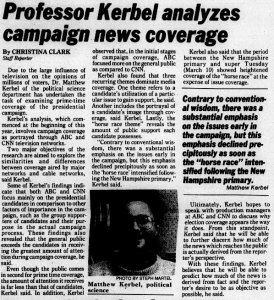 Based on the research discussed in this article, Kerbel published his “Edited for Television: CNN, ABC, and the 1992 Presidential Campaign.” He followed this book up with a number of books throughout the ’90s and early 2000s; he’s credited on all of the following:

These resources, available through the Falvey Memorial Library, will give you an excellent glimpse into Kerbel’s background as a scholar. He also maintains a blog called “Wolves and Sheep,” where he discusses current political issues in relatively short posts.

Whether you’ve been feeling confused and scared, or vindicated and elated by this year’s election, Kerbel’s talk, today at 1pm in Speakers’ Corner, will be the right place to find some answers about moving forward.