‘Cat in the Stacks: A Trip to NYC 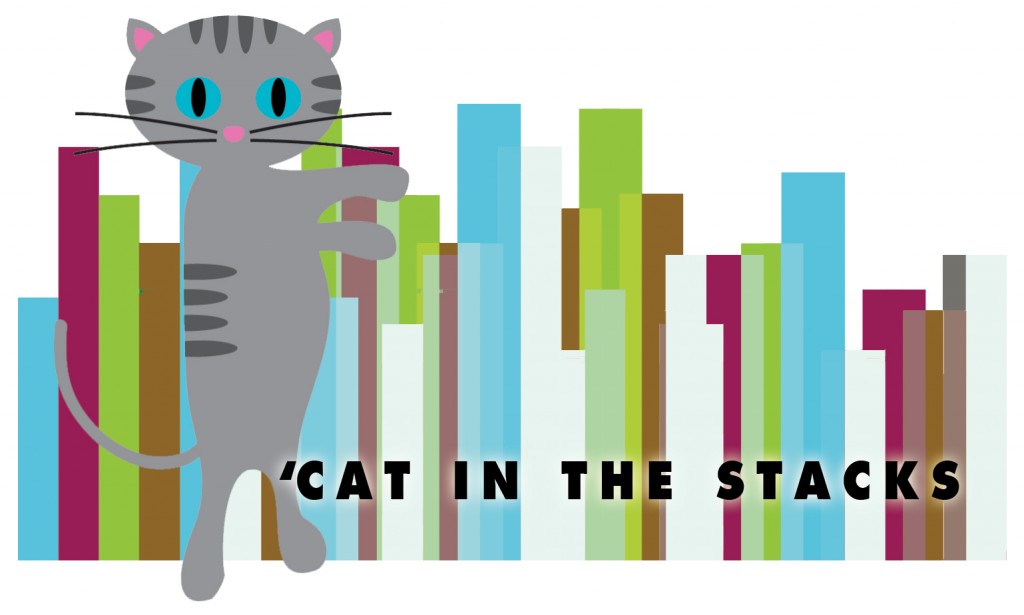 Here’s a personal story. I had the chance to travel to New York City this past weekend to catch up with some friends. Now I know what you’re thinking: the ‘Cat in the Stacks travels outside of the stacks to do other things with his life?! Yes. He does. As discussed in last week’s post, though, the reach of the library extends far beyond the walls of Falvey Hall. As a good graduate student, who’s always ready to dig deeper, I found that information exists about the New York locales I visited in the Falvey Memorial Library databases.

Let’s start with where I stayed. Because certain friends, who just moved into the city, had not yet received the couch they ordered, the ‘Cat in the Stacks was forced to unload some serious membership points to stay at the Grand Hyatt at 42nd Street and Park Avenue. It turns out that in the ’80s the Grand Hyatt among other hotels, got a bad rap for crossing the $200/night threshold. The room was bright and cozy and had a view that was like this: 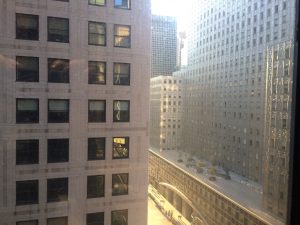 That’s the Chrysler Building on the left and 42nd street down below. Moments after I took this picture, I thought about how the view may have looked in the past. From the Falvey Memorial Library’s Journals A-Z Guide, I accessed the Digital Public Libraries of America Database and found a couple of photos: 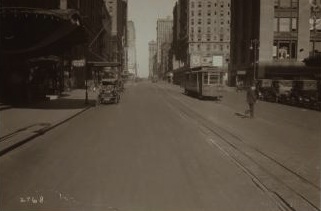 This photo, available here, shows what the view looking the opposite way down 42nd street from my photo would have looked to a passerby in 1919. Another photo (below) shows a photo of Grand Central Station in 1943, with a building that stands in the exact location of the current Grand Hyatt framed on the right side of the photo. In fact, the small part of Park Avenue seen in this photo is exactly where I drove on my way out of town. 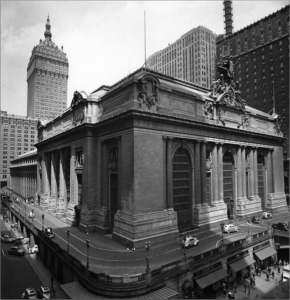 Speaking of Grand Central Station, I had the chance to grab a cup of coffee and take in the sights of the fantastic transportation hub during my stay. Of course, I couldn’t help but look into the history of the building while I was there. The building as seen in this picture was completed and opened on February 2, 1913. According to this article from the Historical New York Times Database, the design seemed to be the first stairless modern railroad station, supposedly an idea derived from Ancient Roman structures.

The building’s history is not without scandal though. As New York City’s homeless move to such central hubs as Grand Central Station during the cold months, the chance for tragedy increases. Once, a homeless woman died in Grand Central after officers supposedly ignored requests for her to receive medical attention. The story was reported by Villanova’s OneBook Author Elizabeth Kolbert in December of 1985. Here’s what the inside of the terminal looks like today: 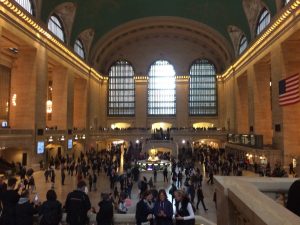 The most spectacular view I saw in New York City, though, came while sitting inside the Gershwin Theatre at 51st and Broadway, where I managed to see a production of “Wicked.” I knew the general premise of the play when I arrived in NYC, but I decided that the library website must have more information on the show. As it turns out, the North American Theatre Online database has an entry for both the play itself and the Gershwin Theatre. You can find actors, producers, set designers, etc. associated with the show on this database; the stage for this particular production, as people were still filing in, looked like this: 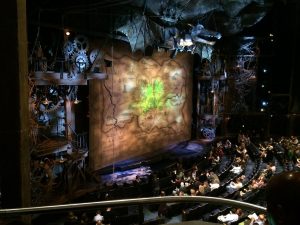 Okay, I’ll stop bombarding you with snippets and photos from a trip that you didn’t go on. But here’s the point: whether traveling home for the upcoming holidays, going on service trips on fall break, or studying abroad, most Villanova students take trips somewhere, even if it’s local. The library does not just maintain sources for you to write those term papers. We maintain sources that help you get a little background about where you’re going, both in the physical sense and in the metaphoric sense. Whether your trip is around the corner in Lower Merion or you’re thinking further down the road in life toward a career, if you start here at the library, you won’t be disappointed.

Citations for those photos that aren’t my own: