The Digital Library has digitized Robert M. O’Reilly’s collection which includes letters written home to his mother, Ellen Maitland O’Reilly, in Philadelphia, during his career in the U. S. Army which lasted over 40 years, from 1867-1909.

In the collection is a series of letters by O’Reilly to his mother soon after he received an appointment as a Medical Cadet in January, 1864. O’Reilly’s first duty station, from April to July, 1864, was the Field Hospital in Chattanooga, Tennessee. In the spring of that year, he wrote home of camp life and his hospital duties. His arrival at the hospital coincided with the onset of General William T. Sherman’s campaign across Georgia, which is commonly referred to as “Sherman’s March to the Sea.” [1] 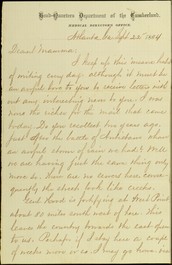 O’Reilly wrote 9 letters that related events from the Atlanta campaign. In his letter home, dated September 22, 1864, O’Reilly mentioned that Confederate General John Hood was “fortifying” position in West Point, Georgia, and remarked about his anticipation of when the “drafted men get down here, and Sherman will astonish the natives.”

It is interesting to note that O’Reilly wrote his mother on printed letterhead from the Head-Quarters Department of the Cumberland, Medical Director’s Office. There is a total of 3 letters O’Reilly sent from the Headquarters.

Check out an earlier blog post on the Robert M. O’Reilly collection.

Want to download the transcription? Go to this page and click on the “Download” button found at the bottom left of the screen. Select the format desired: word document or pdf format.