It’s September 1565, and you’ve just stepped off of a Spanish boat that recently skirmished with French sailors, who hoped to reap the benefits of Spanish treasure ships in the area. (Or maybe they were seeking the mythological Cibola, or perhaps the Fountain of Youth. Maybe that’s why you’ve braved the journey yourself.) You spotted this piece of land a few days ago, on August 28, and so your captain, Pedro Ménendez, has decided to name the spot after the Saint whose feast day occurs on that date – St. Augustine.

Chances are, you were not really there on that late summer day that witnessed the establishment of St. Augustine, Florida, the oldest continuously occupied settlement of the continental United States. You may, however, very well be a Villanova student, faculty member, or staff member, and, if not, you’re certainly on a Villanova web page. You might not know, however, that by virtue of your patronizing an Augustinian institution, you have been adopted by a rich Hispanic Tradition that includes the foundation of the first New World mission and perhaps the first Catholic mass celebrated in North America. 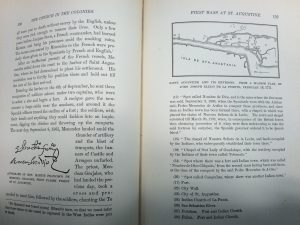 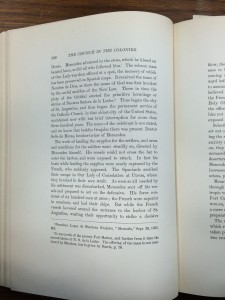 This first mass occurred on September 8, 1565. It took place just south of the settlement that it meant to consecrate. Evidence of this fact comes from the Falvey Memorial Library’s Special Collections itself, from John Gilmary Shea’s History of the Catholic Church within the Limits of the United States (pictured here). The women, men and children who founded St. Augustine were not, in fact, members of the Augustinian order, but their dedication to our patron saint is an important part of understanding what in means to be Villanovan, to be a Wildcat.

To find the true roots of the Order of Augustine in the New World, we must rewind the clock roughly 30 years before that first mass to the year 1533. On March 3 of that year, seven Augustinian friars arrived at Veracruz en route to Ocuituco, Mexico (photo below). St. Thomas of Villanova himself may have dispatched this particular mission, as he was provincial-prior of Castile at the time. 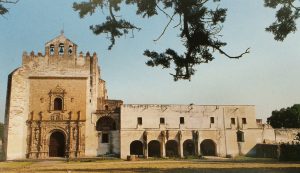 From there, it didn’t take long for the Mexican mission to start producing the type of humanistic scholarship for which the Augustinians are renowned. Most famously, the philosopher Alonso de la Vera Cruz took his profession to join the order in June of 1537 (photo below). It reads, “I Brother Alonso de la Vera Cruz, son of Francis Gutiérrez and Leonor Gutiérrez, make my profession and promise obedience to God and Blessed Mary and to you… [and I promise] to live without personal goods and in chastity according to the rule of our Blessed Father Augustine until death. Given on Wednesday, 20 June 1537.” 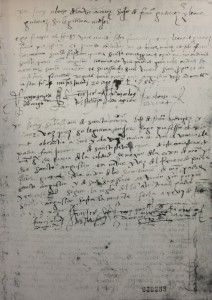 The Augustinian friars associated with the establishment of the order in the Philadelphia area did not arrive in North America until the late 18th century. They mostly came from Ireland and not up the coast of the continent itself, but the efforts of the earlier Augustinians and settlers in Florida certainly made the new, northern mission possible. The successes of St. Augustine, now the oldest parish in the United States, and the outstanding scholarship produced by the South American brothers, such as Vera Cruz, inspired the founders of such schools as Monseigneur Bonner and Villanova University and showed that the order could find success in the New World.

In the coming weeks at the Falvey Library and across campus, you have the chance to find inspiration in your own adopted Hispanic Heritage. Check out a full list of scheduled events, available here.

In addition to exciting events and intriguing speakers, the library itself maintains materials in our collection for further exploration of our Augustinian and Hispanic Heritage. Check out these books, which were used for writing this article!