The Falvey Reading Room: If Walls Could Talk, This Room Could Speak Volumes

Did you hear!?  We’re renovating! The Falvey Hall Reading Room is being transformed into a new signature space with 24/7 ADA access and state of the art technology enhancements that will appeal to twenty-first century students – convenient power outlets, internet stations, WiFi access, convenient power charging stations and comfortable wing-back chairs.

Here’s a brief history of one of Villanova campus’ most storied places!

1949 – The Reading Room first opened in 1949 in what was then the Villanova College Library (renamed in 1963 in honor of the Rev. Daniel P. Falvey [1906-1962], OSA, MSLS). The large, two story high Reading Room was described in The Villanovan:  “The reading room, the largest room in the structure, occupies the entire two floors of the north wing.  Book racks line the walls at about shoulder level, and long blond-oak tables with matching chairs are arranged in the room. … Curtained windows, almost from the floor to the ceiling, filled this room with homey warmth.” (“A Century of Progress,” The Villanovan, Feb. 15, 1949, p.3) 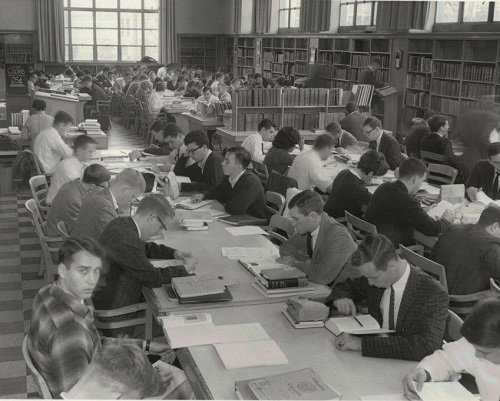 1968 – In order to serve the growing campus, a new larger building, Falvey Memorial Library, was built adjacent to Falvey in 1968. Falvey’s large reserve room on the ground floor served as the replacement for the Reading Room in Falvey Hall.

1980s – In the late 1980s the Reading Room housed collections of microfilms, films, slides, microfiches, VHS tapes and DVDs on utilitarian gray metal shelves filling the room. Through all the transitions, one constant remained – the large painting, “The Triumph of David,” by Pietro da Cortona, on the wall where it had been placed in 1956.

1990s – In the 1990s after the Library Science Department was discontinued, the Mathematics Learning Resource Center was given space in the Reading Room.

2010s – And so the Reading Room remained until the Library began the second floor renovations for its new Learning Commons in 2011. The entire second floor of main Falvey was closed, requiring Business & Administration, Outreach, Communication, and the Director’s Office to relocate into their newly created office spaces in the Reading Room. Prior to the offices relocating, the collections housed there were weeded and relocated, the shelves, old furniture and curtains were removed, and data and telephone lines added. The Learning Commons opened in early 2012 and the occupants of the temporary Reading Room offices moved to their new offices in Old Falvey/Falvey Hall. 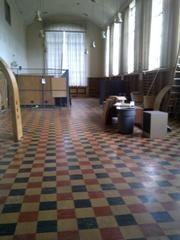 2013 – Empty once again, the Reading Room was transformed into a twenty four hour quiet study space, opening on October 24, 2013. The public conservation of “The Triumph of David” was part of this new space. Conservation of the painting was completed in fall 2015 and the room remained open until June 2016. 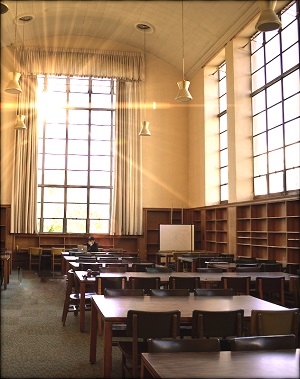 2016 – In June, the room was closed once more – this time for a complete renovation which will transform the Reading Room into “a signature space.” Construction is ongoing with completion anticipated in late September or early October. 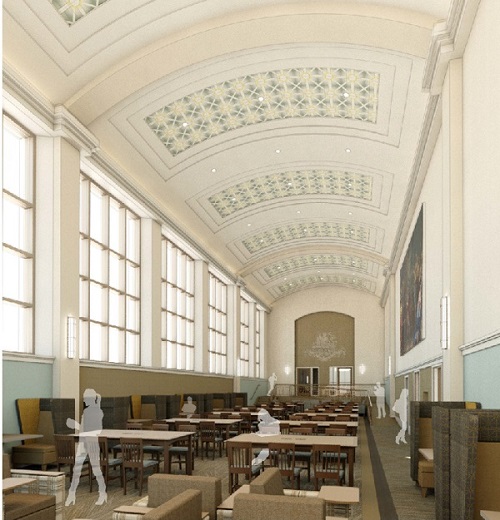 Architect’s rendition of the renovated Reading Room with new ceiling, windows and ADA access from the second floor of Falvey. Image courtesy of BLTa, the firm who designed the renovation.