eBook available: How to Tell Fortunes 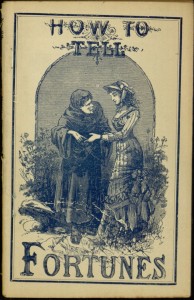 Our latest completed project at Distributed Proofreaders is How to Tell Fortunes, one of publisher Frank Tousey‘s many Ten Cent Hand Books. Like other volumes in this series, the book appears to have been cobbled together from multiple sources, consisting of a lengthy discussion of fortune-telling by dealing out and interpreting playing cards, a catalog of omens and their meanings, meteorological information, lists of lucky and unlucky dates, and a copy of Napoleon’s Oraculum, a sort of paper-based Magic 8-Ball.

The patchwork nature of the book is underscored by the fact that some sections appear to take the idea of fortune-telling seriously while others present the information as amusing but obsolete superstition. Even though the book does not feel like a unified whole, it does offer an interesting turn-of-the-20th-century sampling of perspectives on foretelling the future.

The entire book can be read online or downloaded through Project Gutenberg.