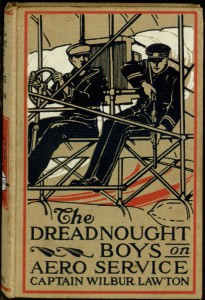 Our most recent completed Distributed Proofreaders project is part of the Dreadnought Boys series of hardcover juvenile novels describing naval adventures in the years just prior to World War I. The Dreadnought Boys on Aero Service is the fourth volume of the series, in which the dutiful boy heroes Ned and Herc volunteer to help the United States Navy experiment with applications for the early airplanes (or “aeroplanes”) of the time. In these books, honor and duty are always opposed by greed and selfishness, so there is another group of bullies and conspirators (including a familiar face from the first book) who must be overcome along the way.

The book makes an interesting study when compared with the nearly-contemporary Motor Stories adventures such as Motor Matt on the Wing, which featured similar themes of early flight and its potential military applications. The hardcover Dreadnought Boys stories take a somewhat more conservative approach to storytelling than the “nickel weekly” Motor Stories, and this Dreadnought Boys adventure even makes a passing derogatory mention of “dime novels,” but there are many obvious similarities.

The full novel may now be read online or downloaded through Project Gutenberg.