Two colorful mosaics welcome visitors to Falvey, one on each side of the foyer (before going through the turnstile). On your right is the Villanova University seal, adopted in 1953 and closely related to the seal created in 1911. On the opposite wall is another seal; this is “the official seal of [the] Augustinian fathers – Province [of] St. Thomas of Villanova” as described by Father Henry B. Syvinski, OSA. Below this seal is a name spelled out in tesserae (small tiles used to create mosaics), “Fr Henry B Syvinski, OSA / Villanova University.” 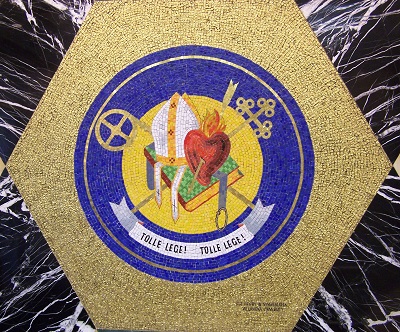 Seal of the Augustinian Province of St. Thomas of Villanova 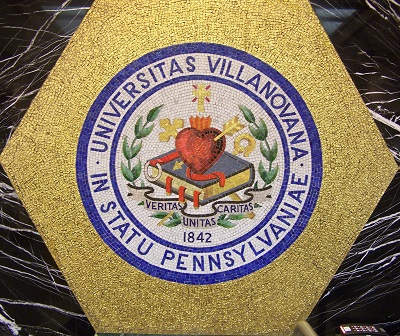 Who is Father Syvinski and why did he sign this mosaic and not the other one? Henry Bronislaw Syvinski (1919-1999), a native of Amesbury, Mass., graduated from Villanova College (it was not yet a university) in 1944 with a bachelor’s degree. He was ordained a priest in 1947 after studying theology at Augustinian College, Washington, D.C. The Rev. Henry B. Syvinski, OSA, continued his studies at Catholic University, Washington, D.C., and in 1948 he received a master’s degree in fine arts. Father Syvinski’s first assignment was in the parish of St. James, Carthage, N.Y. After serving in several other positions over the next ten years, he came to Villanova where he remained for the rest of his life.

In 1958 Father Syvinski became a professor at Villanova University, teaching various courses in religion and fine arts until retiring in 1987, He was also associated with the swimming team, University band, Student Art Club and the Glee Club. Sometimes Father Syvinski offered painting classes to the residents of St. Thomas of Villanova Monastery. In addition to all of these activities he continued to create art, making wood carvings, designing mosaics for four altars in St. Mary’s Hall and designing the mosaic that bears his signature in Falvey’s entrance. 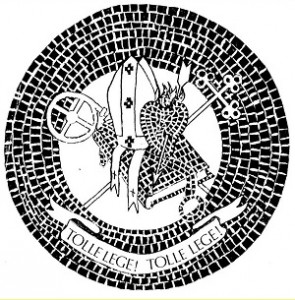 The signed mosaic in the Falvey foyer is the seal of the Province of St. Thomas of Villanova, one of three American Augustinian provinces and the one which sponsors Villanova University. This seal, replaced by a new, simpler design in 1997, includes some of the same symbols as the University seal:  a cross, a crosier/crozier, a flaming heart pierced by an arrow, a book, and a cincture lying on the book. Father Syvinski’s design includes a bishop’s mitre and an inscription, “Tolle lege! Tolle lege!” (Take up and read), which is particularly appropriate for the seal’s location – the entrance to a library. 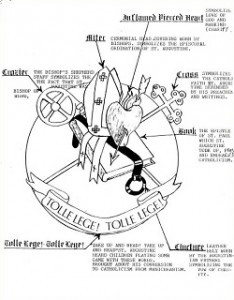 Father Syvinski explained the significance of the various objects. The miter is a “ceremonial head covering worn by bishops. Symbolizes the episcopal ordination of St. Augustine.” The “inflamed pierced heart symbolizes love of God and mankind (charity). Cross symbolizes the Catholic faith St. Augustine defended by his preaching and writings. Book – The Epistle of St. Paul which St. Augustine took up, prays and embraces Catholicism.  Cincture – leather  belt worn by the Augustinian fathers symbolizing the vow of chastity. Tolle Lege! Tolle Lege! – “Take up and read! Take up and read!” St. Augustine heard children playing some game with these words. Brought about his conversion to Catholicism from Manicheanism. Crozier [also spelled crosier] – the bishop’s shepherd staff symbolizes the fact that St. Augustine was Bishop of Hippo.” These explanations are on a drawing of the seal made by Father Syvinski. A copy is kept at the circulation desk in Falvey, available for visitors to examine upon request.

Additional explanations can be found in “The Crest of the University,” which shares much of the same iconography as the provincial seal. This information is in the Villanova University Student Handbook 2014-2015, page 8.

A bit of information about the materials and techniques of mosaics seems appropriate here. A mosaic is an image or design created by embedding small pieces of colored glass, tile or stone (tesserae) in mortar on a hard surface. Golden tesserae are traditionally made by embedding gold foil between sheets of clear glass and then cutting the tesserae to size, The use of mosaics begins with the Sumerians, c.3,000 – 2,600 B.C.; they first created geometric designs using clay pegs set in mud and later used pieces of limestone and mother-of-pearl set in bitumen. The ancient Romans were master mosaicists and the Early Christians learned from them. Mosaics continued to be popular church decorations until the Renaissance (c.1400-1600). They are rarely used for large-scale decorations today because the technique is extremely labor intensive. For modern mosaics, the design is usually worked out on paper, the tesserae cut to size and set into mortar. This is likely the process used by Father Syvinski. For further information about mosaics see Peter Fischer, Mosaic:  History and Technique.