An Author of Few Words 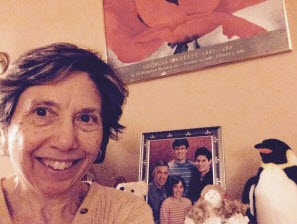 Barbara Quintiliano with Some Favorite Things

What kind of story can you tell in six words? Just ask Barbara Quintiliano, nursing/life sciences and instructional services librarian. She’s an expert at this, having posted 2,225 memoirs so far under her pen name, liberata. Smith Magazine selected Quintiliano as their March 2016 memoirist of the month. March marks her third anniversary with Six Word Memoirs, a project of the online Smith Magazine.

Quintiliano says, “I mean, who can’t write six words? It’s easy and so much fun … Gotta keep on sixing!” One of her six-word memoirs, “Don’t make life a preemptive strike,” is published in The Best Advice in Six Words (released November 2015). The book includes 1,000 contributions including those of celebrities such as Whoopi Goldberg, Molly Ringwald and Lemony Snicket, and Falvey’s own celebrity writer.

Some examples of her other six-word memoirs: “OK, putting my self-doubt to bed,” “Seeking hardcover-wisdom in a Kindle world,” “Progress. Said no to someone today,” “Coffee’s the only weapon I need,” and most appropriate for the six-word format, “I’m really good at doing succinct.” She explains her interest in the Six-Word Memoirs as an outgrowth of her life-long interest in writing in journals, having pen pals and, more recently cyber pals (email).

What is Smith Magazine? It is an online magazine founded and edited by Larry Smith. The magazine is best known for its Six-Word Memoir® project, which Smith launched in November 2006 by asking, “Can you tell your life story in six words?” The challenge became popular with more than one million Six-Word Memoirs published to date.

Before creating Smith Magazine, Larry Smith was an articles editor of Men’s Journal. He had also held other editorial positions and has published articles in The New York Times, Popular Science, Men’s Health, and others.

Who really wrote the first six word memoir? Actually Julius Caesar did it in three words: “Veni, vidi, vici” which translates into six English words: “I came, I saw, I conquered.” Was this Smith’s inspiration? Perhaps, but there is also a legend that Ernest Hemingway was challenged to write a six word story. His answer, “For sale:  baby shoes, never worn.” What ever the answer, the challenge is popular!