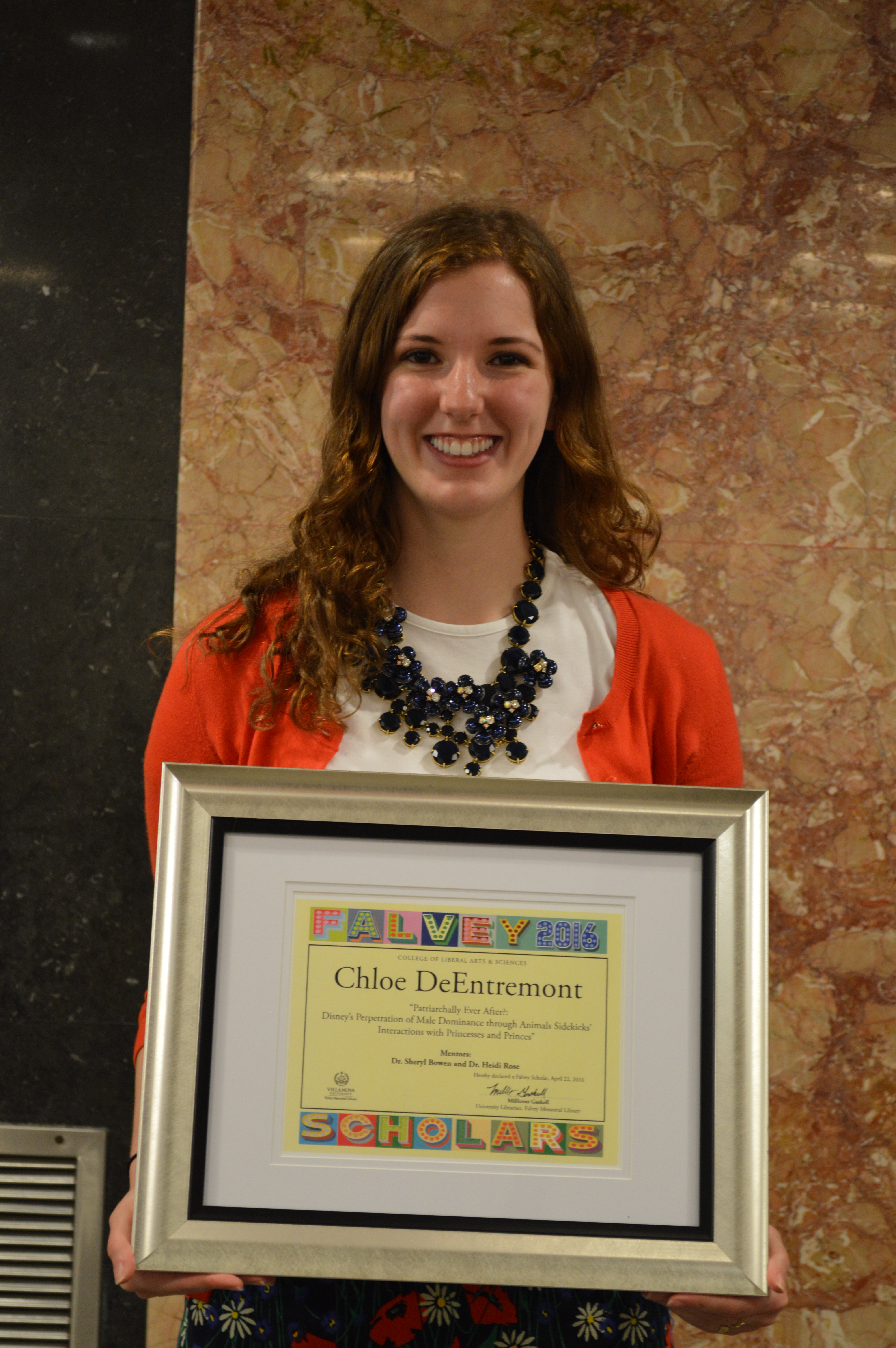 One would be hard pressed to find someone who has never heard of or seen a Disney film. Finding someone who’s done a qualitative study on gender representations in Disney films is probably still doable, though a little rarer. But 2016 Falvey Scholar and Communication major Chloe DeEntremont took a whole new targeted approach for her senior research: how do animal sidekicks in Disney films influence gender hierarchies through gendered communication styles? Her project, titled “Patriarchally Ever After?: Disney’s Perpetration of Male Dominance through Animal Sidekicks’ Interactions with Princesses and Princes,” was organized under the mentorship of Sheryl Bowen, PhD, associate professor, area coordinator of organizational communication and Heidi Rose, PhD, director of graduate studies in communication, associate professor of performance studies, and area coordinator of performance studies. The specificity of DeEntremont’s research question might presumably result in a small sample size, but she very quickly discovered the gender dynamics of Disney animal sidekicks suffuse films all across the Disney filmography, resulting in a 110-page thesis and plenty more stones to overturn in future research.

DeEntremont is from Stony Point, New York–about thirty minutes north of New York City–and she graduated from Albertus Magnus High School in Bardonia, New York. She likes how home is so close to the city but still suburban and forested. DeEntremont, as one might guess,  is a lifelong Disney fan. As a child, she thought that because she had red hair that she was Ariel from The Little Mermaid. Several years later at Villanova, she completed a rhetorical analysis of race in The Princess and the Frog for a qualitative class and could not help but wonder “Maybe Disney isn’t as perfect as I thought it was. What else is going on in Disney that I haven’t seen?”

A fruitful question indeed, and although there is an inherent challenge in researching in-depth the inner workings of something so appreciated, DeEntremont did so bravely and very thoroughly:

From September through December, I spent each day conducting background research for my project using Falvey’s communication guides, specifically Communication & Mass Media Complete, to gather information on anthropomorphism, Disney princesses, and gender hierarchies. I spent hours each week combing through the shelves of the third and fourth floor references searching for old manuscripts and media texts from the 1950s to 1990s on rhetorical methods, feminist criticisms, original fairytales, and Disney’s animal sidekicks. After reading over seventy articles and books, and taking over forty pages of notes and quotes, I narrowed my resources down to forty-two sources for my literature and background content. If it was not for Falvey [Memorial] Library’s extensive records of past and current literature, I would not have gained the materials necessary in accomplishing my thesis goals.

DeEntremont admits that as a freshman, “the databases of Falvey were very intimidating.” But soon one her teachers pointed out the library’s online subject guides and the path became clearer. “I found Mass Media Complete,” she said, praising the EBSCO database. “I’ve been using it since sophomore year … whether it’s Disney or different rhetorical styles, every type of research I do is always Mass Media Complete.”

The Digital Library and Falvey are pleased to announce that all Falvey Scholar Award recipients’ theses will be digitized and made available to the Villanova Community at http://digital.library.villanova.edu/Item/vudl:180038