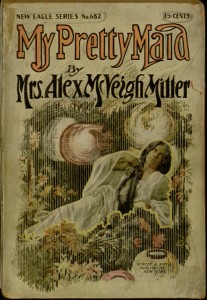 Our latest Project Gutenberg release, produced through Distributed Proofreaders, is another novel by Mrs. Alex. McVeigh Miller: My Pretty Maid; or, Liane Lester.

According to her unpublished autobiography, To Be Continued in Our Next, this story marked one of several turning points in Mrs. Miller’s long writing career. At the time of its writing, she had a contract with Street & Smith to write for The New York Weekly. When a new editor rejected the first installment of this tale, she sold the story to competitor The New York Family Story Paper instead and eventually broke her Street & Smith contract to move back to the Family Story Paper, the venue where her most famous story, The Bride of the Tomb, had debuted. Mrs. Miller claimed to have felt vindicated when, years later, the story was issued in book form by Street & Smith in spite of the earlier rejection. It is this book-form release that formed the basis for the current electronic edition.

The entire novel may now be read or downloaded through Project Gutenberg. Mrs. Miller’s autobiography is not currently available in print or online but may be accessed through arrangement with the Greenbrier Historical Society.